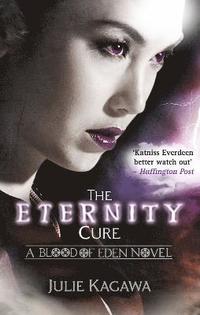 av Julie Kagawa
(1 röst)
Häftad Engelska, 2013-05-01
219
Köp
Spara som favorit
Finns även som
Visa alla 1 format & utgåvor
'Julie Kagawa is a strong new voice' The Sunday Express How do you face the end of eternity? In Allison Sekemoto's world, there is one rule left: blood calls to blood. Allie has done the unthinkable - died so that she might continue to live. Cast out and separated from the boy she dared to love, she follows the call of blood to save her creator, Kanin. But when the trail leads to Allie's birthplace, what she finds there could change the world forever... There's a new plague on the rise - a new strain of the disease that wiped out most of humanity generations ago - and this one is deadly to humans and vampires alike. The only hope for a cure lies in the secrets Kanin carries. Allison thought that immortality was forever. But now, with eternity itself hanging in the balance, the lines between human and vampire will blur even further. Return to Julie Kagawa's dark and twisted world as an unforgettable dystopian journey continues. Perfect for fans of Holly Black, Sarah J Maas and Tomi Adeyemi. *********************************************** Readers adore The Eternity Cure! 'I love love love this series!' 'You will love this book - read it!' 'What an ending!' 'I was so enthralled by this book I finished it in a day!' 'I couldn't put it down' 'Stop what you are doing and buy these books!' *********************************************** The Blood of Eden series Book One: The Immortal Rules Book Two: The Eternity Cure Book Three: The Forever Song
Visa hela texten

'A genuine page-turner... Julie Kagawa is a strong new voice in the young adult world.' The Sunday Express on The Iron King 'We think we've found the next crossover hit...' The Sunday Times on The Iron King 'Allie is a terrific heroine-tough, pragmatic, yet sympathetic-and readers will be hungry to see where her story goes. Kagawa wraps excellent writing and skillful plotting around a well-developed concept and engaging characters, resulting in a fresh and imaginative thrill-ride that deserves a wide audience.' *Starred* Publishers Weekly review 'Action packed, rife with drama and moral quandaries, and laced with an impossible romance, this first in the Blood of Eden series will hit the mark with readers who like some supernatural in their dystopias and don't mind a bloody sword fight.' Booklist 'Allie's a smart, strong and compelling heroine, and readers will gladly join her for this adrenaline-rich ride.' Kirkus Reviews

Julie Kagawa was born in Sacramento, California. But nothing exciting really happened to her there. So, at the age of nine she and her family moved to Hawaii, She worked as a professional dog trainer for several years, until she stopped training to write full-time. She is the New York Times bestselling author of multiple series including: The Iron Fey, Blood of Eden, the Talon Saga and most recently the Shadow of the Fox .