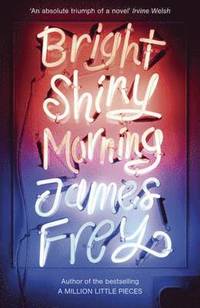 av James Frey
Häftad Engelska, 2009-03-19
129
Bevaka
Spara som favorit
Tillfälligt slut – klicka "Bevaka" för att få ett mejl så fort boken går att köpa igen.
Finns även som
Visa alla 1 format & utgåvor
'An absolute triumph of a novel' Guardian 'Compulsive' Independent Welcome to LA. City of contradictions. It is home to movie stars and down-and-outs. Palm-lined beaches and gridlock. Shopping sprees and gun sprees. Bright Shiny Morning takes a wild ride through the ultimate metropolis, where glittering excess rubs shoulders with seedy depravity. Frey's trademark filmic snapshots zoom in on the parallel lives of diverse characters, bringing their egos and ideals, hopes and despairs, anxieties and absurdities vividly to life. Some suffer, like the otherworldly wino who tries to save a spoilt teenage runaway. Others gain, like the canny talent agent who turns sexual harassment to blackmailing advantage. Some are loaded, or grounded, and have luck on their side. Others, like the countless actresses-turned-hookers, or schoolboys-turned-gangsters, are doomed.
Visa hela texten

'An absolute triumph of a novel. In fact it's so good that it makes Frey's real-life resurrection from crooked biographer to great American novelist far more impressive . . . Frey, a natural novelist to his fingertips, hits the deeper truths with this honest, vibrant and tender portrait of Los Angeles and the American dream . . . It can be no exaggeration to say that Bright Shiny Morning amounts to the literary comeback of the decade . . . James Frey is probably one of the finest and most important writers to have emerged in recent years' * Irvine Welsh, Guardian * 'He turns cliches into characters robust enough to carry this 500-page Californian odyssey' * Guardian * 'A sparkling narrative, which doesn't shrink from exposing the city's seamier side but ultimately is a huge celebration' * Daily Mail * Frey writes with pace and energy * Times Literary Supplement * 'A compulsive piece of popular fiction . . . He's an excellent entertainer . . . Frey can tell a story and has a fine eye for the variegated economic milieux in which his characters travel. So what if, by the end, you come away thinking the novel superficial and lacking in original insight? This is Los Angeles, baby. And in LA superficiality has its own integrity' * The Times * 'Frey clearly has a knack for telling tales - this story of interweaving, never-meeting strangers in LA is an engrossing read' * The Times * '[It] pays little heed to conventional syntax, thus creating a beguiling momentum of its own, propelled by raw emotion and energy ... this compulsive novel is testament that good fiction can reveal powerful emotional truths' * Independent on Sunday * An intriguing novel peopled by characters whose presence lingers once reading has ceased * List * 'A furiously good storyteller' * New York Times * 'Taking the scattergun approach of his bestseller, A Million Little Pieces, [Frey] exposes the grubby reality of the Hollywood dream' * Marie Claire * 'Totally addictive' * Time Out * 'An immaculately written novel about a kaleidoscope of characters living in LA' * Tatler * 'A sprawling, ambitious novel about Los Angeles, written with all the broad-stroke energy that was so irresistible to readers in A Million Little Pieces' * Vanity Fair * 'Bright Shiny Morning has released [Frey] from the memoir trap, revealing an easy . . . storytelling facility' * Observer * 'Frey has produced a novel that is defiant in both its grammatical rebellion and its fierce pace' * Observer * A fascinating book, challenging and stylish * The West Australian * 'All the characters are cleverly juxtaposed against the history and atmosphere of Los Angeles itself ... a riveting and hugely enjoyable read: rushy, entertaining and appealing' * Sunday Business Post * 'This dazzling novel focuses on a crazy cross section of the city's fictional characters' * Look Magazine * 'Frey has constructed a spaghetti junction of LA stories that is irresistible, frustrating and compelling' * RTE Guide (Ireland) * 'For fans of gritty modern writing, this fast and fascinating story paints a portrait of the Los Angeles that Hollywood films and TV dramas rarely show' * Bella * 'The gritty, gloriousness of James Frey's writing will suck you in ... one of our favourites already!' * U Magazine * '[Frey] takes us deep inside the city of inspiring actors, singers, models and dancers. The city of nose jobs, breast implants, Botox and liposuction.' 'Don't be fooled by the apparently glamorous setting of this novel. This book is a gritty, disturbing and definitely emotional insight into the LA lifestyle, yet it's not all doom and gloom either. Frey's undeniable sense of humour, wit and charm ensure you definitely get your fair share of laughs along the way. This book is an absolute, without a doubt, must read. * Victoria Holden, Student Direct (Official Directory of Manchester and Salford) *

James Frey is originally from Cleveland, Ohio. He is married and lives in New York.