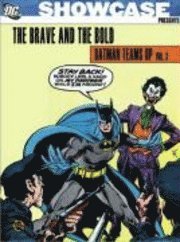 Bob Haney was a prolific comics writer best known for his work for DC Comics. He co-created the Silver Age Teen Titans and the Doom Patrol, as well as less famous characters such as Metamorpho, Eclipso and Cain. His other work included Sgt. Rock, World's Finest Comics, The Brave and the Bold, Blackhawk, The Unknown Soldier and Deadman. He also co-created Cain and his gargoyle Gregory, well-known for their appearances in Neil Gaiman's Sandman series. He passed away in 2004.