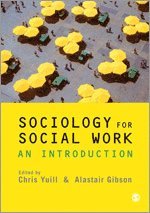 The book comes with access to an exciting companion website offering the reader downloads, web links, powerpoint slides and case studies. Every chapter of the book further includes further case studies, along with lots of clear definitions of terms, and reflection points, making this book the essential introductory text for all social work students.
Visa hela texten

Chris Yuill is a sociologist at Robert Gordon University, Aberdeen, whose work focuses on the sociology of health and the sociology of urban experiences. In addition to a variety of journal publications and research reports he has written and co-edited a number of textbooks for SAGE, one of his most recent being Sociology for Social Work co-edited with Alastair Gibson. Other texts include Understanding the Sociology of Health: An Introduction with Anne-Marie Barry, which is now in its third edition and has also been translated into Chinese. Chris has also served two terms on the executive of the British Sociological Association.

Alastair Gibson graduated with an MA in History before becoming frustrated as a hospital administrator and deciding to move into the more challenging and rewarding practice of social work. He worked in Aberdeen and Gateshead in a variety of health care social work settings and then taught at RGU. Developing his enthusiasm for inter-professional practice, he was a founder member of CAIPE and helped develop shared training for social work, health, education and police trainees. He has thoroughly enjoyed teaching Human Growth and Behaviour as well as being Course Leader of the BA (Hons) Social Work by Distance Learning before retiring in 2009. He is now an independent practice teacher.