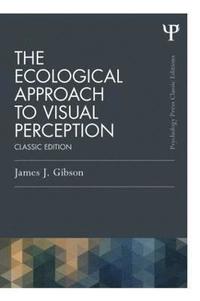 The Ecological Approach to Visual Perception

av James J Gibson
Häftad Engelska, 2014-11-27
779
Köp
Spara som favorit
Skickas inom 5-8 vardagar.
Gratis frakt inom Sverige över 159 kr för privatpersoner.
Finns även som
Visa alla 3 format & utgåvor
This book, first published in 1979, is about how we see: the environment around us (its surfaces, their layout, and their colors and textures); where we are in the environment; whether or not we are moving and, if we are, where we are going; what things are good for; how to do things (to thread a needle or drive an automobile); or why things look as they do. The basic assumption is that vision depends on the eye which is connected to the brain. The author suggests that natural vision depends on the eyes in the head on a body supported by the ground, the brain being only the central organ of a complete visual system. When no constraints are put on the visual system, people look around, walk up to something interesting and move around it so as to see it from all sides, and go from one vista to another. That is natural vision -- and what this book is about.
Visa hela texten

James J. Gibson (1904-1979) is one of the most important psychologists of the 20th century, best known for his work on visual perception. He received his Ph.D. from Princeton University and his first major work was The Perception of the Visual World (1950) in which he rejected behaviorism for a view based on his own experimental work. In his later works, including The Ecological Approach to Visual Perception (1979), Gibson became more philosophical and criticized cognitivism in the same way he had attacked behaviorism before, arguing strongly in favor of direct perception and direct realism, as opposed to cognitivist indirect realism. He termed his new approach "ecological psychology". Gibson's legacy is increasingly influential on many contemporary movements in psychology, particularly those considered to be post-cognitivist.

Introduction to the Classic Edition by William M. Mace. Preface. Introduction. Part I: The Environment To Be Perceived.The Animal and the Environment. Medium, Substances, Surfaces. The Meaningful Environment. Part II: The Information For Visual Perception.The Relationship Between Stimulation and Stimulus Information. The Ambient Optic Array. Events and the Information for Perceiving Events. The Optical Information for Self-Perception. The Theory of Affordances. Part III: Visual Perception.Experimental Evidence for Direct Perception: Persisting Layout. Experiments on the Perception of Motion in the World and Movement of the Self. The Discovery of the Occluding Edge and Its Implications for Perception. Looking with the Head and Eyes. Locomotion and Manipulation. The Theory of Information Pickup and Its Consequences. Part IV: Depiction. Pictures and Visual Awareness. Motion Pictures and Visual Awareness. Conclusion. Appendixes: The Principal Terms Used in Ecological Optics. The Concept of Invariants in Ecological Optics.