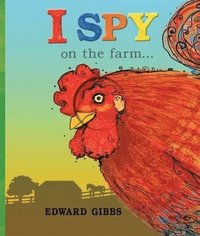 I Spy on the Farm

av Edward Gibbs
Inbunden Engelska, 2012-04-01
142
Köp
Spara som favorit
Finns även som
Visa alla 1 format & utgåvor
Down on the farm there are many colourful and noisy animals to spy. Look through the spyhole and use the clues to guess; then turn the page to reveal the animal. Watch as toddlers quickly become engaged in the game - joining in with the animal noises, learning colours and eventually recognising the letter and its sound. It's interactive, it's educational, but ultimately it's great fun! This is the third book in the series, so there's even more to spy in I Spy With My Little Eye - (colours) and I Spy Under the Sea - (counting).
Visa hela texten

Edward Gibbs is an exciting new talent in children's books. This will be his fifth book for Templar's imprint, Brubaker, Ford & Friends. I Spy With My Little Eye - , Little Bee and The Acorn publish in April 2011, were followed by I Spy Under the Sea - in August. Edward studied illustration at college but became a graphic designer, where he fine-tuned the art of distilling detailed or difficult ideas into their simplest form. He uses this special skill in all his books. Edward lives in London.