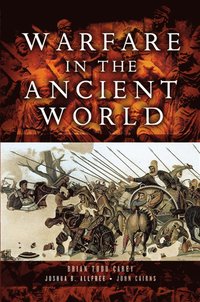 Warfare in the Ancient World (e-bok)

av Brian Todd Carey, Joshua Allfree
E-bok (EPUB), Engelska, 2021-02-26
149
Ladda ned
Spara som favorit
Laddas ned direkt
Läs i vår app för iPhone, iPad och Android
Finns även som
Visa alla 1 format & utgåvor
Warfare in the Ancient World explores how civilizations and cultures made war on the battlefields of the Near East and Europe between the rise of civilization in Mesopotamia in the late fourth millenium BC and the fall of Rome.

Through a exploration of twenty-six selected battles, military historian Brian Todd Carey surveys the changing tactical relationships between the four weapon systems - heavy and light infantry and hevay and light cavalry - focusing on how shock and missile combat evolved from tentative beginnings in the Bronze Age to the highly developed military organization created by the Romans.

The art of warfare reached a very sophisticated level of development during this three millenia span. Commanders fully realized the tactical capabilities of shock and missile combat in large battlefield situations. Modern principles of war, like the primacy of the offensive, mass, and economy of force, were understood by pre-modern generals and applied on battlefields throughout the period.

Through the use of dozens of multiphase tactical maps, this fascinating introduction to the art of war during western civilization?s ancient and classical periods pulls together the primary and secondary sources and creates a powerful historical narrative. The result is a synthetic work that will be essential reading for students and armchair historians alike.
Visa hela texten