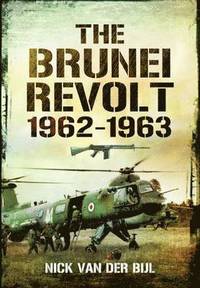 av Nicholas Van Der Bijl
Inbunden Engelska, 2012-12-10
219
Köp
Spara som favorit
Skickas inom 7-10 vardagar.
Fri frakt inom Sverige för privatpersoner.
In December 1962, nationalists in Brunei, the hugely wealthy small kingdom on the North Coast of Borneo, formed the Army of North Kalimantan (TNKU) and, demanding greater democracy, engineered a rebellion against the Sultan and seized a large number of hostages. Perceived to be an attempt by communists to destabilise the Sultanate and seize power, within twelve hours of its outbreak, British forces were despatched by ship and aircraft from Singapore to restore order, the first unit to arrive being 1/2nd Gurkhas, who entered the capital. Within the week, the 1 Queens Own Highlanders had recaptured the strategically important oilfields and occupied Seria, 42 Commando, Royal Marines attacked Limbang and 1 Green Jackets landed in west Brunei. The next six months were spent rounding up TNKU and, since there were major concerns that Indonesia could be behind the Revolt, the charismatic Major General Walter Walker, then commanding 17th Gurkha Division, was sent to Brunei to command operations. By mid-May 1963, the surviving TNKU had been captured. While rapidly suppressed, the Revolt was the catalyst for the three year Confrontation with Indonesia 1963-66.
Visa hela texten

Written by one of J Battery's former forward observation officers, Richard Mountford, it provides a vivid picture of operations. The Times The author joined the intelligence corps in 1970 and over the next twenty years saw service in many countries. The Bulletin

Nick van der Bijl BEM spent 25 years, most in the Intelligence Corps between 1970 and 1989. Since retiring from the Army, he has pursued a career in security management in the defence industry, courier sector and the NHS. He is a Trustee of the Military Intelligence Museum. He has numerous published works in print with Pen and Sword Books including Nine Battles to Stanley, Victory in the Falklands, Confrontation, Operation BANNER and Sharing the Secret, A History of the Intelligence Corps. He lives in Somerset.