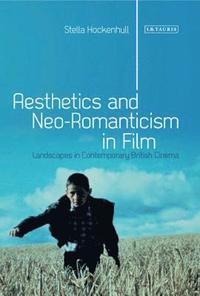 Aesthetics and Neoromanticism in Film

av Stella Hockenhull
Inbunden Engelska, 2013-11-30
1019
Köp
Spara som favorit
Skickas inom 10-15 vardagar.
Fri frakt inom Sverige för privatpersoner.
The contemporary study of film is dominated by narrative theory - yet films include scenes and images which do not perform a narrative task but nevertheless provoke an emotional response. Stella Hockenhull looks at the painterly dimensions inherent in the medium of film, arguing that an aesthetic analysis enables a fuller appreciation of the visual 'spectacle' of cinema. In a reading of the formal aspects in film imagery in contemporary British films spanning social realist, melodrama and horror genres, Hockenhull demonstrates how the spiritual aspects of landscape and nature mobilise a Neo-Romantic effect. She traces the influence of Romanticism and notions of the Sublime in key British films including Sweet Sixteen, The Queen, Ratcatcher, Eden Lake, 28 Days Later, My Summer of Love and The Last Great Wilderness. Operating at the intersection between film theory, art theory and aesthetics, this is a vital contribution which enables a fuller, multidimensional understanding of cinematic experience.
Visa hela texten

'Stella Hockenhull brings an art historian's knowledge and a visually sensitive eye to the often lamented pictorialism of British cinema. Examining the relationship between a crop of recent British films and contemporary paintings, she demonstrates the continuing pertinence of Romanticism and the 'sublime' to understanding the emotional impact and significance of their narratively unmotivated attention to landscape. By these means this study leads us on a journey that not only remaps the dominant modes and generic practices of British cinema but deepens understanding of the affectivity of the cinematic experience itself.' Professor Christine Gledhill, Centre for Research in Media and Cultural Studies, University of Sunderland 'This book demonstrates how important landscape remains as a signifying feature of British cinema, uniting a group of very different kinds of filmmakers working across a variety of genres... Stella Hockenhull reveals how British contemporary cinema depicts landscapes and figures in landscapes, establishing some intriguing correlations with recent and contemporary British art. This interdisciplinary approach uses concepts and structures of feeling associated with (Neo-) Romanticism, demonstrating the pervasiveness and versatility of such forms as they adapt to new historical and cultural contexts. Notions of pure and impure landscape, prospect views and the ruckenfugur reveal not only how landscape has been repeatedly used by filmmakers in Britain but used with some degree of consistency... The benefit of the approach taken by Hockenhull... enables readers to better judge the potential of an aesthetic approach to film study and analysis, maintaining the questions of how films create meanings and feelings rather than why. As Hockenhull has shown throughout the rich and diverse chapters of her book, these are considerable questions to pose, providing a rich set of issues for us to reflect upon.' Dr Martin Shingler, Senior Lecturer in Film and Radio Studies, University of Sunderland

Stella Hockenhull is a Senior Lecturer in Film Studies, based at the Wolverhampton City Campus. Prior to working at Wolverhampton, she taught at Chester Art College, Liverpool University and Staffordshire University. She is the author of Neo-Romantic Landscapes: An Aesthetic Approach to the Films of Powell and Pressburger (2008).

List of Illustrations Acknowledgements Introduction: Aesthetics and Emotion: Remystifying Film Studies 1 Ruckenfigurs and Realism: from Sweet Sixteen to Better Things 2 Sublime Horror: Moorlands, Mountains and Mudflats in the 'Not Home' Setting 3 Female Landscapes: No Prospects for The Queen, the Ladies in Lavender, The Magdalene Sisters or Miss Potter 4 The Dream of Home: Hopes, Holidays and Happenings in the Accented Film Conclusion Notes Bibliography Index