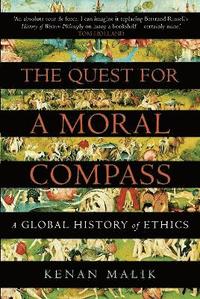 The Quest for a Moral Compass

A Global History of Ethics

av Kenan Malik, Kenan Malik
(1 röst)
Häftad Engelska, 2015-04-02
145
Köp
Spara som favorit
Finns även som
Visa alla 1 format & utgåvor
In this remarkable and groundbreaking book, Kenan Malik explores the history of moral thought as it has developed over three millennia, from Homer's Greece to Mao's China, from ancient India to modern America. It tells the stories of the great philosophers, and breathes life into their ideas, while also challenging many of our most cherished moral beliefs. Engaging and provocative, The Quest for a Moral Compass confronts some of humanity's deepest questions. Where do values come from? Is God necessary for moral guidance? Are there absolute moral truths? It also brings morality down to earth, showing how, throughout history, social needs and political desires have shaped moral thinking. It is a history of the world told through the history of moral thought, and a history of moral thought that casts new light on global history. At a time of great social turbulence and moral uncertainty, there will be few histories more important than this.
Visa hela texten

An absolute tour de force. I can imagine it replacing Bertrand Russell's History of Western Philosophy on many a bookshelf - certainly mine. -- Tom Holland This is an extraordinarily rewarding investigation of the most striking, and contested, aspect of our humanity... To read it is not only to be better informed but also to be more alert to the assumptions that have guided human beings in the past, and to our capacity for goodness and wickedness. -- Raymond Tallis What I love about Kenan Malik's book is its unashamed, unabashed ambition: he wants to write the history of moral thought, not just in the Western tradition, but of all the traditions that make up the global argument about the direction that the human moral compass should point. The result is a tour de force of lucidity and narrative skill. -- Michael Ignatieff The Quest for a Moral Compass is a remarkable achievement... While demonstrating genuine command of the subtleties of the hundreds of topics covered, he consistently chooses the accessible, the concise, the precise, and the broad-ranging over the technical, theoretical, and trivial. I learned more than I can say and will no doubt be consulting this book often in the future. -- Austin Dacey

Kenan Malik is a writer, lecturer and broadcaster. He is a presenter of Analysis of BBC Radio 4, and a panelist on The Moral Maze. He has taught at universities in Britain, Europe, Australia and the USA, presented many TV documentaries and writes regularly for newspapers across the world including the New York Times, the Guardian, Goeteborgs-Posten and the Australian. His books include Man, Beast and Zombie, Strange Fruit and From Fatwa to Jihad, which was shortlisted for the 2010 Orwell Prize.