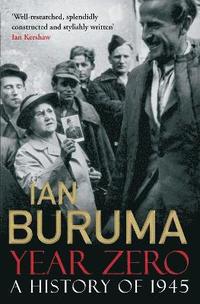 av Ian Buruma
Inbunden Engelska, 2013-10-03
299
Köp
Spara som favorit
Specialorder (osäker tillgång). Skickas inom 11-20 vardagar.
Gratis frakt inom Sverige över 159 kr för privatpersoner.
Finns även som
Visa alla 4 format & utgåvor
Many books have been written, and continue to be written, about the Second World War: military histories, histories of the Holocaust, the war in Asia, or collaboration and resistance in Europe. Few books have taken a close look at the immediate aftermath of the worldwide catastrophe. Drawing on hundreds of eye-witness accounts and personal stories, this sweeping book examines the seven months (in Europe) and four months (in Asia) that followed the surrender of the Axis powers, from the fate of Holocaust survivors liberated from the concentration camps, and the formation of the state of Israel, to the incipient civil war in China, and the allied occupation of Japan. It was a time when terrible revenge was taken on collaborators and their former masters; of ubiquitous black markets, war crime tribunals; and the servicing of millions of occupation troops, former foes in some places, liberators in others. But Year Zero is not just a story of vengeance. It was also a new beginning, of democratic restorations in Japan and West Germany, of social democracy in Britain and of a new world order under the United Nations. If construction follows destruction, Year Zero describes that extraordinary moment in between, when people faced the wreckage, full of despair, as well as great hope. An old world had been destroyed; a new one was yet to be built.
Visa hela texten

Buruma's book is a study of the mess that the world was in 1945, a mess we choose largely not to remember. It is also a brief but valuable study of how that mess began to be cleaned up. It gives us, too, simple lessons, both touching and terrifying, about how human beings are and can be... Excellent and lucid -- David Aaronovitch * The Times * Ian Buruma's wonderful book is about a time, immediately after the end of the war, which has somehow fallen between the cracks of history, and which the author has now devastatingly brought to light... A compelling and astounding addition to the literature of the war -- Christopher Hudson * Daily Mail * Brilliant... Year Zero is a major acheivement, a book of many parts, which commemorates a generation, as they stood on the brink of an unknown future -- Joanna Kavenna * Spectator * A superbly written chronicle of the conflict's bittersweet aftermath -- Ian Thomson * Observer * Moving and excellent -- Neal Ascherson * Guardian * Ian Buruma's elegant and humane new book illuminates one of the most important modern historical moments: the spring and summer of 1945, immediately after the second world war -- Rana Mitter * Financial Times * Buruma excels as a social historian of the aftermath of the war... It is hard to overstate Buruma's accomplishment in crafting the first truly worldwide account of perceptions and experiences in the pivotal years after the guns had fallen silent... Outstanding -- Samuel Moyn * Prospect * Sweeping... [The] book's most substantial merit is its grasp of the moral, social, and political confusions that pervaded every nation following the war... Buruma conveys a powerful sense of the horror and chaos of 1945 -- Max Hastings * Foreign Affairs * Ian Buruma's lively new history, Year Zero, is about the various ways in which the aftermath of the Good War turned out badly for many people, and splendidly for some who didn't deserve it. It is enriched by his knowledge of six languages, a sense of personal connection to the era and his understanding of this period -- Adam Hochschild * New York Times * It is well written and researched, full of little-known facts and incisive political analysis. What makes it unique among hundreds of other works written about this period is that it gives an overview of the effects of the war and liberation, not only in Europe, but also in Asia. -- Charles Simic * New York Review of Books * A graphic account - well-researched, splendidly constructed and stylishly written - of the hinge year of the twentieth century, of its horrors, hopes, illusions and roots of troubles to come. Altogether compelling - a fine achievement. -- Ian Kershaw Year Zero - 1945 - is the founding moment of the modern era. Ian Buruma's history of that moment is vivid, compassionate and compelling. -- Michael Ignatieff A brilliant recreation of that decisive year of victory and defeat, chaos and humiliation, concentrating on peoples, not states... In the face of so much horror, it is an astounding effort at deep comprehension. A superb book, splendidly written. -- Fritz Stern Ian Buruma gives a heart-wrenching account of the horrors, the unimaginable cruelties, and the sheer stupidities of the last months of World War II, and the attempts to deal with them in the first months of peace. -- Brian Urquhart Year Zero is a searing indictment of war, yet not about the Second World War itself but about its aftermath, the trauma, the revenge, the regrets, the desire to forget, the need to remember... This is Ian Buruma at his best. -- Donald Sassoon Buruma is an admirably thoughtful writer -- Dominic Sandbrook * Sunday Times *

Ian Buruma was educated in Holland and Japan. He has spent many years in Asia, which he has written about in A Japanese Mirror, Bad Elements and A Tokyo Romance. His other books include: The Wages of Guilt, Murder in Amsterdam (shortlisted for the Samuel Johnson Prize and winner of the Los Angeles Times Book Prize), Anglomania, Year Zero and Their Promised Land. He was awarded the Erasmus Prize in 2008 and was named as one of the 100 top global thinkers by Foreign Policy magazine in 2010. Buruma lives in New York, where he teaches at Bard College.