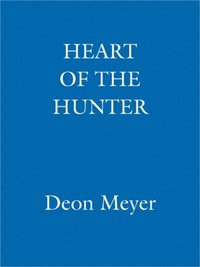 Heart Of The Hunter (e-bok)

av Deon Meyer
E-bok (EPUB - DRM), Engelska, 2007-08-23
Den här boken kan endast laddas ned av privatpersoner.
41
Den här boken kan endast laddas ned av privatpersoner.
Ladda ned
Spara som favorit
Laddas ned direkt
Läs i vår app för iPhone, iPad och Android
Finns även som
Visa alla 1 format & utgåvor
From the author of Thirteen Hours - A Sunday Times '100 best crime novels and thrillers since 1945' pickThe big man known as 'Tiny' has a past littered with violence and death. An assassin's past that he hopes never to face again.But when his best friend is kidnapped, Tiny suddenly finds himself on the back of a stolen motorbike, speeding away from his child and the woman he loves.Tiny has only 72 hours in which to deliver a computer disk that one group of people would kill to possess, and another would kill to destroy. If he fails, his best friend dies.HEART OF THE HUNTER is the tale of one man's struggle for survival against a corrupt government, a group of bloodthirsty killers and most of all, against his past.
Visa hela texten

A new book by Deon Meyer is a cause for celebration. Heart of the Hunter is not just an exciting story of a pursuit; it paints a thought-provoking picture of today's South Africa Sunday Telegraph A brand-new talent and a welcome change of locale for thriller fans...An impressively tangled web and taut narrative keeps the reader guessing until the last couple of pages Heat*** on DEAD AT DAYBREAK Despite the complexity of its tightly woven plot - skilfully revealed through newspaper articles and intelligence reports - Meyer's U.S. debut moves at a breathtaking pace that will carry readers away. A sympathetic protagonist and the landscape of South Africa add colour to the story. Highly recommended Starred Review, Library Journal Exceptional...a taut post-Apartheid thriller pitting a common man against a corrupt government...Breakneck pacing, staccato dialogue...think Mystic River meets Rambo, in a setting suggesting The Gods Must Be Crazy Bookpage Out of post-apartheid South Africa comes a thriller good enough to nip at the heels of le Carre...Wonderful setting; rich, colourful cast, headed by a valiant/vulnerable protagonist Kirkus Reviews (Starred Review) Like John le Carre's THE TAILOR OF PANAMA, this novel examines the rippling horrors too often caused by so-called intelligence agents working for foreign masters in backwater nations. With simmering racial tensions, a bounty of natural resources, and a government whose members worked both sides of the cold-war fence, South Africa should prove fertile ground for many fine spy thrillers to come. Don't be surprised if quite a few of them are written by Meyer. Starred Review, Booklist

Deon Meyer lives in Durbanville in South Africa with his wife and four children. Other than his family, Deon's big passions are motorcycling, music, reading, cooking and rugby. In January 2008 he retired from his day job as a consultant on brand strategy for BMW Motorrad, and is now a full time author. Deon Meyer's books have attracted worldwide critical acclaim and a growing international fanbase. Originally written in Afrikaans, they have now been translated into twenty-five languages. THIRTEEN HOURS was shortlisted for the CWA International Dagger and won the Boeke Prize in South Africa - the first time in the prize's 16 year history that a South African book has won. Visit the author's website at www.deonmeyer.com and follow him on Twitter @MeyerDeon