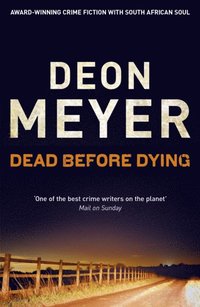 av Deon Meyer
E-bok (EPUB - DRM), Engelska, 2009-12-11
Den här boken kan endast laddas ned av privatpersoner.
41
Den här boken kan endast laddas ned av privatpersoner.
Ladda ned
Spara som favorit
Laddas ned direkt
Läs i vår app för iPhone, iPad och Android
Finns även som
Visa alla 1 format & utgåvor
From the author of Thirteen Hours - A Sunday Times '100 best crime novels and thrillers since 1945' pickONE COP. ONE KILLER. TWO CAPTIVES OF THE PAST.Mat Joubert, once a rising star of the South African police force, had it all. Then his wife was murdered, and his hopes died with her. Alcoholic, depressed and overweight, he is a shadow of his former self.Then a new killer appears on the streets of Cape Town, murdering at random. Mat throws himself into the case, viewing it as his last chance for redemption.But, as their shared desire for revenge threatens to destroy both him and the mysterious killer he is hunting, Mat soon learns that he is not the only one with ghosts to lay to rest . . .
Visa hela texten

An impressively tangled web and taut narrative keeps the reader guessing until the last couple of pages. Heat The atmosphere of a hot, turbulent country is very vividly evoked, and the characterisation is dynamic ... A striking debut novel. Crime Time A plot-driven page-turner ... Joubert is a haunted yet sympathetic protagonist. Bookpage Meyer subtly juxtaposes the heartbreak of the victims' families with the heartbroken detective assigned to their cases. Using humour and pathos in equal measure, Meyer builds a deeply moving portrait of a man in search of his own dignity. Booklist

Deon Meyer lives in Durbanville in South Africa with his wife and four children. Other than his family, Deon's big passions are motorcycling, music, reading, cooking and rugby. In January 2008 he retired from his day job as a consultant on brand strategy for BMW Motorrad, and is now a full time author. Deon Meyer's books have attracted worldwide critical acclaim and a growing international fanbase. Originally written in Afrikaans, they have now been translated into twenty-five languages. THIRTEEN HOURS was shortlisted for the CWA International Dagger and won the Boeke Prize in South Africa - the first time in the prize's 16 year history that a South African book has won. Visit the author's website at www.deonmeyer.com and follow him on Twitter @MeyerDeon