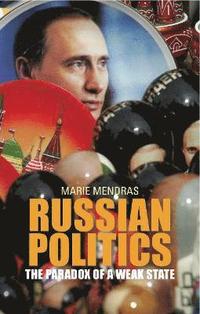 The Paradox of a Weak State

av Marie Mendras
Inbunden Engelska, 2012-05-01
359
Köp
Spara som favorit
Skickas inom 5-8 vardagar.
Fri frakt inom Sverige för privatpersoner.
What has become of the Russian state twenty years after the collapse of Communism? Why have the rulers and the ruled turned away from democratic institutions and the rule of law? What explains the Putin regime's often uncooperative policies towards Europe and its difficult relations with the rest of the world? These are among the key issues discussed in this essential book on contemporary Russia by Marie Mendras, France's leading scholar on the subject. Mendras provides an original and incisive analysis of Russia's political system since Gorbachev's perestroika. Contrary to conventional thinking, she contends that today the Russian state is weak and ineffective. Vladimir Putin has dismantled and under- mined most public institutions, and has consolidated a patronage system of rule. The Medvedev presidency was but one chapter in the story, as Putin's re-election exemplifies. Political and economic power remains concentrated in the hands of a few groups and individuals, and the elites remain loyal to the leadership in order to hold on to their positions and prosper. Those at the helm of the state are unaccountable to the society they govern. Up until the economic crisis of 2008, ordinary Russians largely turned a blind eye to these authoritarian methods because living standards had markedly improved. The economic slowdown, rising corruption and unfair elections have put the leadership under pressure, and have caused unprecedented public protest.
Visa hela texten

'A solid study of the Putin political regime, emphasizing the structural tensions between a highly effective authoritarian political machine and a governmental system that cannot effectively manage the modernization of post-Communist Russia.' * Russian Review * 'A brilliantly textured portrait and fiercely argued expose of the troubled and troubling political condition of Putin's Russia. Paradoxically, as Mendras lucidly explains, the Russian state abuses its citizens precisely because it is too weak to control itself. ... the most stimulating work yet published on the origins and evolution of post-communist Russian politics.' * Stephen Holmes, Walter E. Meyer Professor of Law, New York University School of Law * 'This is a lucid, fresh and shrewd history of the failure to modernize the old Soviet state by the new Russian elite. It is particularly timely in the light of the current crisis in the Russian political system.' * Sir Lawrence Freedman, Professor of War Studies and Vice-Principal, King's College London * 'Marie Mendras fine insights into Russia's trajectory encompass the roots of personalised power, the evolution of society, the political dynamics of the leadership, the paradoxes and vulnerabilities of the managed democracies and bureaucratic capitalism and the resurgence of aggressiveness in Russian foreign policy. Russian Politics: the Paradox of a Weak State is a first-rate, compelling, and indispensable contribution on one of the most important countries in the world at the start of a dramatic search for its identity.' * Lilia Shevtsova, Carnegie Endowment for International Peace and author of Russia: Lost in Transition * 'At last, a serious scholar has confronted the fallacy that Russia is condemned to autocracy. If you look carefully, argues Mendras, you will see that attitudes are evolving and that the potential for a civil society does exist. Now it is up to the Russians. Yes, to that.' * Susan Richards, Open Democracy and author, Lost and Found in Russia *

MARIE MENDRAS is Professor at Sciences Po University and Research Fellow with the National Centre for Scientific Research (CNRS) in Paris. She runs the Observatoire de la Russie at the Centre for International Study and Research (CERI) and is an Associate Fellow of the Russia and Eurasia Programme at Chatham House.