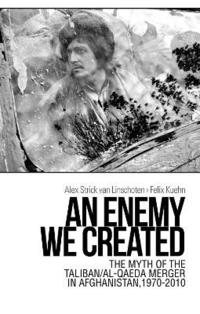 An Enemy We Created

av Alex Strick Van Linschoten, Felix Kuehn
Inbunden Engelska, 2012-01-01
409
Köp
Spara som favorit
Skickas inom 7-10 vardagar.
Fri frakt inom Sverige för privatpersoner.
Finns även som
Visa alla 1 format & utgåvor
There is a widespread belief that the Taliban and al-Qaeda are in many respects synonymous, that their ideology and objectives are closely intertwined and that they have made common cause against the West for decades. Such opinions have been stridently supported by politicians, media pundits and senior military figures, yet they have hardly ever been scrutinised. This is all the more surprising given that the West's present entanglement in Afghanistan is commonly predicated on the need to defeat the Taliban in order to forestall further terrorist attacks worldwide. The relationship between the two groups and the individuals who established them is undeniably complex, and has remained so for many years. Links between the Taliban and al-Qaeda were retained in the face of a shared enemy following the invasion of Afghanistan after the September 11 attacks, an adversary that was selected by al-Qaeda rather than by the Taliban, and which led the latter to become entangled in a war that was not of its choosing. This book is the first to examine in detail the relationship from the Taliban's perspective based on Arabic, Dari and Pashtu sources, drawing on the authors' many years experience in southern Afghanistan, the Taliban's heartland. They also interviewed Taliban decision-makers, field commanders and ordinary fighters while immersing themselves in Kandahar's society. Van Linschoten and Kuehn's forensic examination of the evolution of the two groups allows the background and historical context that informed their respective ideologies to come to the fore. The story of those individuals who were to become their key decision-makers, and the relationships among all those involved, from the mid-1990s onwards, reveal how complex the interactions were between the Taliban and al-Qaeda and how they frequently diverged rather than converged. An Enemy We Created concludes that there is room to engage the Taliban on the issues of renouncing al-Qaeda and guaranteeing that Afghanistan will deny sanctuary to international terrorists. Yet the insurgency is changing, and it could soon be too late to find a political solution. The authors contend that certain aspects of the campaign, especially night raids and attempts to fragment and decapitate the Taliban, are transforming the resistance, creating more opportunities for al-Qaeda and helping it to attain its goals.
Visa hela texten

'This book is one of the best informed, most sophisticated and most insightful works yet to appear on the Afghan Taliban and their relationship to Al-Qaeda. It makes a brilliant contribution to Afghan historiography, and should be compulsory reading for Western policymakers working on Afghanistan today.' -- Professor Anatol Lieven, King's College London 'Essential reading for anyone who wants to understand the war in Afghanistan. In offering a forensic dissection of the relationship between al Qaeda and the Taliban, over many years, it offers bad news, and good news: that, in taking on the Taliban, we may be fighting the wrong enemy in the wrong country; but that the Taliban may be open to a negotiated settlement - provided America gets on with it.' -- Sir Sherard Cowper-Coles, British Ambassador to Kabul 2007-2009, Special Representative for Afghanistan 'Ignore anybody claiming to be an expert on the Taliban or al Qaeda if they have not read An Enemy We Created. Most books on the subject are written without fieldwork, by people lacking the language skills, the courage, the integrity or the dedication of these two authors. Thanks to their Arabic, Dari and Pashtu skills as well as their groundbreaking and unprecedented fieldwork, Strick van Linschoten and Kuehn have written the essential book on the subject. Say nothing about the region until you have read it!' -- Nir Rosen, author of Aftermath: Following the Bloodshed of America's Wars in the Muslim World and Fellow at New York University's Center on Law and Security 'A fascinating look deep into the shifting interactions of the Taliban and Al Qaeda by authors who have lived close to the persons they study. Their conclusions about the radicalisation of the younger generation of the Afghan Taliban and the unintended consequences of NATO military actions are directly relevant to policy considerations of today's war in Afghanistan.' -- Ronald Neumann, Former US Ambassador to Afghanistan 2005-2007 'One of the key justifications of the escalation of the war in Afghanistan is the (supposedly) unshakable link between Al Qaeda and the Taliban. So far, studies addressing this question have generally been written with a limited understanding of the Taliban movement. Alex Strick van Linschoten and Felix Kuehn, who recently edited the memoirs of Mullah Zaeef, My Life With the Taliban, here offer a major contribution to the understanding of the complex and changing relationship between the two movements. Specialists in the field will find an erudite and balanced work based on multiple interviews with key players and a deep knowledge of local politics. But, beyond academia, their conclusions should be part of the discussion about the current strategy. If the Taliban are not controlled or even under the influence of Al Qaeda, a negotiated settlement becomes a reasonable goal. One can only hope that Washington will listen to these knowledgeable voices and start understanding the real nature of the Taliban movement.' -- Gilles Dorronsoro, visiting scholar at the Carnegie Endowment for International Peace, Professor at the Sorbonne University (Paris) 'Finally, someone has taken on the often-repeated but not-much-sourced assumption that every group hiding in the Afpak mountains is more or less the same thing, that Afghan and Pakistani Taliban as well as Al Qaeda and Pakistani sectarians and jihadists are all part of a big 'terrorism syndicate'. This is not only wrong but also dangerous since policies are conceived on this basis. Strick van Linschoten and Kuehn provide plenty of material, amongst it a lot that has never been scrutinised before, and they do it from knowing what they are talking about from inside the country, not from behind Hesco walls. It is a gold mine for people who really want to know. Can the Obama administration spend some atoms of its Afpak budget to buy a couple of hundred copies and distribute it amongst those involved in the upcoming policy review?' -- Thomas Ruttig, C

Bloggat om An Enemy We Created

Alex Strick van Linschoten and Felix Kuehn are researchers and writers permanently based in Kandahar. They have worked in Afghanistan since 2006, focusing on the Taliban insurgency and the history of southern Afghanistan over the past four decades. They are regular commentators on major western news channels.