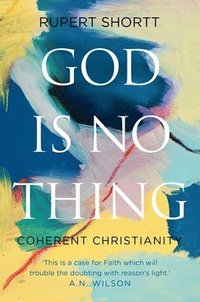 God is No Thing

av Rupert Shortt
Inbunden Engelska, 2016-03-17
149
Köp
Spara som favorit
Skickas inom 10-15 vardagar.
Fri frakt inom Sverige över 159 kr för privatpersoner.
Although parts of the Western world now appear almost totally secularised, Christianity remains the most potent worldview on earth alongside Islam. In this compelling book, Rupert Shortt gracefully argues that Christianity is a much more coherent, progressive body of belief - philosophically, scientifically and culturally - than often supposed by its critics. Alert to the menace posed by religious fundamentalism, as well as to secularist blind spots, he shows how a self-critical faith is of huge consequence to wider human flourishing, including through promoting peace and environmental sustainability
Visa hela texten

Shortt offers a conception of nature which grants us the right to say that it brims over with intimations of the divine. * Times Literary Supplement * This is a case for Faith which will trouble the doubting with reason's light. -- A.N. Wilson A powerful indirect commendation of Christian faith ... [T]his is an excellent book, spirited, lucid and plainspoken without losing generosity. It deserves a place alongside the best of the recent crop of intelligent responses to the New Atheism. -- Rowan Williams * The Guardian * Rupert Shortt takes no prisoners. This is Christian apologetics with shirt-sleeves rolled up. -- Diarmaid MacCulloch, Professor of the History of the Church, University of Oxford, and author of 'A History of Christianity: The First Three Thousand Years' [Shortt] is in a line stretching back to C. S. Lewis, Dorothy Sayers, and G. K. Chesterton . . . his evident learning, combined with an engaging style and light touch, makes this a book that can be confidently placed in the hands of even the most stubborn sceptic with some hope of a fair hearing . . . This short book packs a punch. * Church Times * One word that is attached to the reality of God is transcendent -- he is like goodness and truth and life, only more so. But as Rupert Shortt . . . reminds us, God is also, in the words of St Augustine of Hippo, closer to us than we are to ourselves. * The Telegraph * [Shortt] sets out with modesty, sensitivity and unfailing courtesy to demonstrate the coherence of Christian belief, managing along the way to encompass a remarkably wide range of topics, with elegance and economy. ... But for all its courtesy and absence of scorn, God is No Thing unflinchingly tackles the philosophically naive parodies of Christian belief targeted in secularist criticism ... skilfully weaving a way through the confusions and ambiguities arising from the use of the word "creation" in both scientific and theological contexts. * The Tablet * An intellectually robust case for Christianity . . . [Shortt] brings thoughtfulness and intellectual rigour to his defence . . . deserves to be reflected upon and debated by believers and unbelievers alike. * The Catholic Herald * Deft and timely: a primer for believers, and for everyone else, of the ways in which Christianity feeds heart and mind. -- Francis Spufford, author of 'Red Plenty' and 'Unapologetic' Rupert Shortt's passionate book is a fine antidote to the distorted and simplified views of Christianity widespread in the current debate about religion. Many books have attempted to describe what is wrong with the 'new atheist' account of religion -- Shortt's is one of the best. In articulating a 'grown-up form of Christianity between scepticism and fundamentalism', it will surely speak to those believers who have 'lived themselves into a new way of thinking', in Shortt's memorable phrase. But it ought to be of interest also to those atheists who want to understand what the Christian life might genuinely be like. -- Tim Crane, Knightbridge Professor of Philosophy '[A] meditative exploration of what Christian commitment means in the contemporary world.' Rupert Shortt's intellectually and emotionally engaging essay succeeds admirably in bringing out how far authentic Christian belief diverges from the crude caricatures of its secular critics and the misguided literalism of its fundamentalist advocates. -- John Cottingham, Professor Emeritus of Philosophy, University of Reading, Professorial Research Fellow, Heythrop College London, and Honorary Fellow, St John's College, Oxford 'God Is No Thing' is a beautifully written spiritual tour de force, drawing on rich and profound sources in philosophy, theology and comparative religion. At its heart is a compelling argument that contrasts authentic religious pluralism with religious relativism. The reader is ultimately brought to his irresistible conclusion -- that Christianity is the religion of love that most fully fits the human heart. -- Jo

Bloggat om God is No Thing

Rupert Shortt is Religion editor of the Times Literary Supplement and a former Visiting Fellow at Oxford University. His books include Benedict XVI (2005), Christianophobia: A Faith under Attack (2012) and Rowan's Rule: The Biography of the Archbishop (2014).