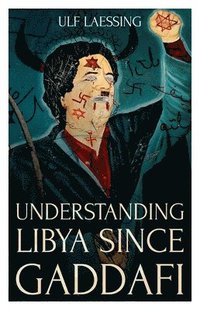 av Ulf Laessing
(1 röst)
Häftad Engelska, 2020-06-25
239
Köp
Spara som favorit
Fåtal ex i lager. Skickas inom 1-2 vardagar.
Gratis frakt inom Sverige över 159 kr för privatpersoner.
Why has Libya fallen apart since 2011? The world has largely given up trying to understand how the revolution that toppled Muammar Gaddafi has left the country a failed state and a major security headache for Europe. Gaddafi's police state has been replaced by yet another dictatorship, amidst a complex conflict of myriad armed groups, Islamists, tribes, towns and secularists. What happened? One of few foreign journalists to have lived in post-revolution Tripoli, Ulf Laessing has unique insight into the violent nature of post-Gaddafi politics. Confronting threats from media-hostile militias and jihadi kidnappings, in a world where diplomats retreat to their compounds and guns are drawn at government press conferences, Laessing has kept his ear to the ground and won the trust of many key players. Understanding Libya Since Gaddafi is an original blend of personal anecdote and nuanced Libyan history. It offers a much-needed diagnosis of why war has erupted over a desert nation of just 6 million, and of how the country blessed with Africa's greatest energy reserves has been reduced to state collapse.
Visa hela texten

'A cautionary tale of how the cement applied by dictatorship can, once broken, yield chaos. ... Laessing's is a tale of many villains, from feuding fighters to meddling outside powers who have turned the renewed civil war into a proxy international conflict.' * Financial Times * 'What makes this book interesting is the fact that the author's analysis is interlaced with his personal experience of reporting from the country. We get a taste of the country that rarely comes across in standard news reports.' -- Middle East Monitor 'This frank, fascinating account highlights the difficulties and dangers of press reporting from post-Gadafi Libya. It reveals how and why political, economic and social anarchy dominates a country where rival armed militias are "still the true rulers".' -- John Wright, former chief political commentator and analyst of the BBC Arabic Service, and author of 'A History of Libya' and 'Libya, Chad and the Central Sahara' 'Ulf Laessing is widely recognised as one of the most astute observers of post-Gaddafi Libya. He has traveled throughout the country, reporting in dangerous conditions. A must-read, this volume offers an informed, objective, and balanced account of Libya's current travails.' -- Ronald Bruce St John, author of 'Libya: From Colony to Revolution' and 'Libya: Continuity and Change' 'Laessing's book is a fascinating account of the chaos in Libya following Gaddafi's overthrow. It is a necessary book for all those who seek to understand Libya today.' -- Luis Martinez, author of 'The Libyan Paradox' 'Ulf Laessing blends analysis and on the ground observation to produce an outstanding account of why Libya remains mired in chaos today--his book will undoubtedly remain the go-to in order to understand Libya's enduring problems and complexities.' -- Dirk Vandewalle, Associate Professor of Government, Dartmouth College, and author of 'A History of Modern Libya' 'Ulf Laessing's new book, Understanding Libya Since Gaddafi is an excellent exposition of the reasons for the continuing conflict in Libya since the 2011 revolution. It is packed with personal insights and anecdotes from his travel throughout Libya and his meetings with key political. tribal, military and economic players, as well as with ordinary Libyans. It also explains the origins of the tribal and regional divisions within the country and the way power, money and status drive the competing ambitions of the country's leaders. Laessing underlines the need for a genuine national dialogue and shows how outside interference is sustaining a disastrous conflict on Europe's borders. A valuable addition to the compendium of books and studies about this troubled country.' -- Peter Millet, former British ambassador to Libya 'Ulf Laessing delivers a highly readable book-- richer and better thought-out than just another reporter's travelogue. Over the better part of the last decade, the Reuters veteran has frequently travelled both sides of the troubled nation's main fault-line, a truly rare feat. Both in Tripolitania and Cyrenaica, Laessing spent long periods of time witnessing events historic and mundane alike. The net result is a first-hand account nobody interested in post-2011 Libya can afford to skip.' -- Jalel Harchaoui, research fellow and Libya specialist at the Clingendael Institute, The Hague 'Laessing's insights into the disruptive militias are uniquely vivid and insightful. He captured wonderfully well the "fluid, transactional and opportunistic" aspects of post-Qaddafi Libya, the fragmentation and networks that made (and continue to make) it so challenging and difficult to arrive at durable agreements and roadmaps for progress.' -- Deborah K Jones, former US ambassador to Libya.

Ulf Laessing is Reuters bureau chief for Egypt, Sudan and Libya; he was formerly the Reuters correspondent in Libya and has covered the country since 2011.