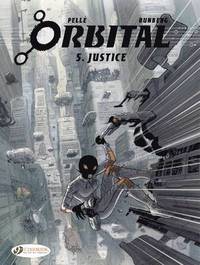 av Sylvain Runberg
Häftad Engelska, 2013-10-03
109
Köp
Spara som favorit
Skickas inom 3-6 vardagar.
Fri frakt inom Sverige för privatpersoner.
Following the Kuala Lumpur incidents, which almost prevented the Human-Sandjarr reconciliation ceremony from being held, the situation on Earth is increasingly tense. The mood has turned ugly, resulting in attacks against aliens and assassinations of isolationist personalities. Meanwhile, the circles of Confederate powers are afire with political manoeuvring, and Mezoke is on trial for high treason, a convenient scapegoat. But when the judges request that Caleb be brought out of his regenerative coma to testify, the Sandjarr agent's loyalty is put to the test...
Visa hela texten

Sylvain Runberg has several series published, including "Orbital" (2006), "Hammerfall" (2007) and "Darwin's Diaries" (2010),. He's recently been picked to pen adaptations of the Swedish novel series "Millennium" for both the French and US markets. Serge Pelle used to work in advertising. He published his first book in 1996 and, since then, has divided his time between drawing comics, designing sets and video games, and creating cartoon animation.