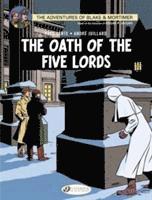 av Yves Sente
(3 röster)
Häftad Engelska, 2014-05-06
119
Köp
Spara som favorit
Skickas inom 5-8 vardagar.
Fri frakt inom Sverige över 159 kr för privatpersoner.
Death in the present re-awakens a dark time in Blake's past. 1919. Colonel Lawrence - Lawrence of Arabia - has an unpleasant meeting with an MI5 agent who confiscates his manuscript of The Seven Pillars of Wisdom. 35 years later, Oxford is shaken by a series of burglaries at the Ashmolean Museum, at the same time as Blake learns of the death of an old friend. The captain begins an investigation, while Mortimer looks into the thefts...But what dark connection does all of this have with Lawrence or Blake's own past?
Visa hela texten

Andre Juillard is a celebrated artist with a career spanning more than 35 years. He has worked on famous series such as "Les Sept Vies de L'Epervier" and "Masquerouge" and obtained the Grand Prix at the Angouleme festival in 1996. Yves Sente began writing scripts in 1999 and has already acquired considerable clout, being chosen as successor to Van Hamme for the series "Thorgal" and the sequel to "XIII" and working with Van Hamme on "Blake & Mortimer."