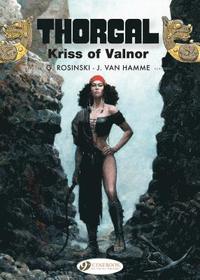 av Jean Van Hamme
Häftad Engelska, 2018-11-01
109
Köp
Spara som favorit
Skickas inom 3-6 vardagar.
Fri frakt inom Sverige för privatpersoner.
Aaricia and her children, sold as slaves to an Imperial prince, refuse to believe that Thorgal is dead, and keep trying to escape, eventually wearing off their new owner's patience. Condemned to a year of hard labour in the silver mines, they meet someone unexpected there: Kriss of Valnor, wielding the whip of a forewoman, yet a prisoner like them. Despite their mutual hatred, the two women will have to work together to escape...
Visa hela texten

Jean Van Hamme was born in 1939 in Belgium. His major breakthrough came in 1977, when he created the Viking hero Thorgal for Grzegorz Rosinski. The mix of medieval legends and heroic fantasy soon became a huge success, with major awards following. He is also the creator of the bestselling series Largo Winch and XIII (published in English by Cinebook). Grzegorz Rosinski is one of the most popular artists of comic books in Western Europe. Among his later works are the series Chninkel (with Van Hamme) and a series titled Lament of the Lost Moors (with Jean Dufaux). In 2001, the Rosinski/Van Hamme duo published yet another comic book titled Western, based in the American Old West.