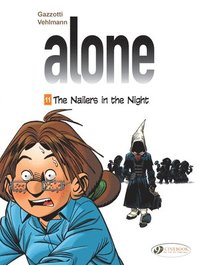 Alone Vol. 11: The Nailers In The Night

av Fabien Vehlmann
Häftad Engelska, 2020-07-23
109
Köp
Spara som favorit
Kan tyvärr inte längre levereras innan julafton.
While trying to escape an avalanche triggered by the killers of the First Families, Ivan drowned. Though this is a less permanent problem that it used to be for the children, Ivan 'returned' far from his friends, in a small village in Brittany where he used to holiday with his parents. There he lives alone, preparing for the long trip back to Neo-Salem. Until the day Camille, now revealed as the Midnight Child, pays him a terrifying visit, and the nightmare begins...
Visa hela texten

Fabien Vehlmann got into comics by flooding Spirou Magazine with proposed scripts until he was accepted. Since then he's proven his mettle with such hits as Green Manor and a Spirou one-off, before becoming in 2009 the new official team for Dupuis' flagship series with Yoann. Bruno Gazzotti started by doing odd jobs at Spirou Magazine, eventually becoming Tome and Janry's assistant on Little Spirou. In 1990 he takes over the art on SODA, a highly successful series that will make him a household name.