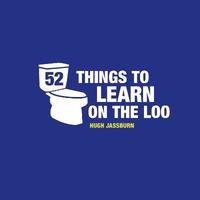 52 Things to Learn on the Loo

Things to Teach Yourself While You Poo

av Hugh Jassburn
Inbunden Engelska, 2015-10-08
87
Köp
Spara som favorit
Skickas inom 5-8 vardagar.
Gratis frakt inom Sverige över 159 kr för privatpersoner.
Make use of those dull moments on the lav by teaching yourself how a starfish eats a clam, how to say 'Hello' in every European language and what the dot over an i is called. Covering all types of trivia, from science and natural history to the different types of moustache, this little book contains enough fascinating facts to keep you learning throughout the year. 'A great way to get shit done' Loo Quarterly
Visa hela texten

Hugh Jassburn has been pooing since 1974. After several months of producing a variety of stools (mostly in washable and reusable nappies) he moved on to disposables. By 1978 Hugh was a regular toilet user and hasn't looked back since. He is not a fan of cheap toilet paper, and strongly believes the flap should always be at the front of the roll. Hugh lives in Shitterton, Dorset, and dreams of moving to Pratt's Bottom in Kent one day.