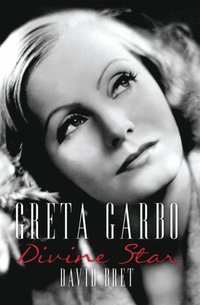 av David Bret
E-bok (EPUB - DRM), Engelska, 2012-06-25
218
Ladda ned
Spara som favorit
Ladda ned och läs i en e-boksläsare. Tips på appar
In the male-oriented studio system, Greta Garbo wielded a power no other actress has ever possessed, before or since. Be it producer, director, lover or journalist, Garbo called the shots, and when she decided that she was done with the whirlwind of life as Hollywood's darling she withdrew completely, leaving her public begging for an encore that never came. Though there have been numerous biographies of Garbo, this is the first to investigate fully the two so-called missing periods in the life of this most enigmatic of Hollywood stars: the first during the late 1920s, forcing MGM to employ a lookalike to conceal what was almost certainly a pregnancy; the second during World War II when Garbo was employed by British Intelligence to track down Nazi sympathisers. It also analyses in detail the original, uncensored copies of Garbo's films - with the exception of The Divine Woman, of which no complete print survives - and offers substantial evidence that John Gilbert was not, in fact, the great love of her life. Rather her true affections lay with the gay, Sapphic and Scandinavian members of her very intimate inner circle. Using previously unsourced material, along with anecdotes from friends and colleagues that have never before been published, David Bret paints a rounded portrait of Garbo's childhood in Sweden, her rise to stardom and her all-too-brief reign as queen of MGM. Hers is a truly remarkable story, recounted here with warmth, intensity and unique insight.
Visa hela texten