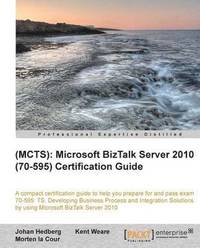 Packed with practical examples and Q&As, (MCTS): Microsoft BizTalk Server 2010 (70-595) Certification Guide covers the keys skills in the exam and starts by showing you how to configure a Messaging Architecture. The book then dives into BizTalk Artifacts such as creating Schemas and Pipelines, creating Maps and creating Orchestrations. It then moves on to topics such as debugging and exception handling, deploying, tracking and administrating a BizTalk Server 2010 solution, integrating Web Services and Windows Communication Foundation (WCF) Services and implementing Extended Capabilities. Additional practical resources are also included that will enable you to approach the Microsoft BizTalk Server 2010 (70-595) exam with ease, including certification test taking tips and tricks and sample certification test questions.
Visa hela texten

Johan is based in Stockholm where he works as a consultant, solutions architect and certified trainer. His employer, Enfo Zystems, is one of the largest consultancy firms in Sweden and the Nordic region that's solely dedicated to integration. Johan has over 10 years of experience architecting and developing enterprise grade solutions based on Microsoft technologies. He works closely with Microsoft through the Business Platform Technology Advisory and Virtual Technology Solution Professional programs, and with the community as a Microsoft Most Valuable Professional and one of the founders of the BizTalk User Group Sweden. He blogs at http://blogical.se/blogs/johan and can be found as @JoHed on Twitter. Born in Regina, Saskatchewan, Canada, Kent Weare developed a love for ice hockey, football and technology. He attended the University of Regina where he obtained a Degree in Computer Science. After completing his undergrad degree, he spent time in India completing a Post Graduate diploma in Object Oriented Technology. He currently lives in Calgary, Alberta, Canada but remains a die-hard Saskatchewan Roughrider football fan. Kent began his career at a small Internet startup before taking on a junior roll with the Saskatchewan Government. Since then he has worked on projects for the Canadian Federal Government, a multi-national bank in the United States, Health Care projects in Eastern and Western Canada, and has spent the last five years employed by a large Electricity Distribution company in Calgary. Kent's current responsibilities involve managing a Microsoft Solutions team that supports BizTalk, Exchange, Office Communication Server (OCS) and System Center. During Kent's time at the Federal Government, he had an opportunity to participate in his first BizTalk project. Seven years later he is still "hooked" on BizTalk having worked with every BizTalk version released since. In 2008, Kent was awarded his first Microsoft MVP award for BizTalk Server. He continues to be active in the BizTalk community and recently received his fifth consecutive MVP award. Kent maintains active blogs at http://kentweare.blogspot.com and http://www.MiddlewareInTheCloud.com. He may also be seen presenting BizTalk-related material at local and international user groups. Born in Denmark, Morten la Cour has worked with the MS BizTalk Server platform for seven years. Besides designing and developing Integration solution for customers, he has also worked on deployment and maintenance of BizTalk applications and BizTalk Server environments. He has taught several BizTalk Server courses both in development, deployment and management. Besides working with MS BizTalk Server, Morten has 13 years of experience on the Microsoft development platform, including the .NET Framework and SQL Server. Other experience includes: XML, XSLT, XPATH and Oracle databases.