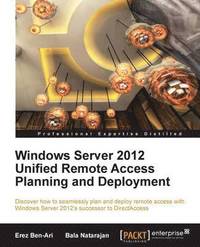 With Unified Remote Access, Windows server 2012 offers a unique way to provide remote access that is seamless and easier to deploy than traditional VPN solutions.

With URA, the successor to DirectAccess, your users can have full network connectivity that is always-on. If you have deployed Windows Server 2012 or are planning to, this book will help you implement Unified Remote Access from concept to completion in no time!

Unified Remote Access, the successor to DirectAccess, offers a new approach to remote access, as well as several deployment scenarios to best suit your organization and needs. This book will take you through the design, planning, implementation and support for URA, from start to finish.

"Windows Server 2012 Unified Remote Access" starts by exploring the mechanisms and infrastructure that are the backbone of URA, and then explores the various available scenarios and options. As you go through them, you will easily understand the ideal deployment for your own organization, and be ready to deploy quickly and easily. Whether you are looking into the simplest deployment, or a complex, multi-site or cloud scenario, "Windows Server 2012 Unified Remote Access" will provide all the answers and tools you will need to complete a successful deployment.
Visa hela texten

Erez Ben-Ari is a long time Technologist and Journalist, and has worked in the Information Technology industry since 1991. During his career, Erez has provided security consulting and analysis services for some of the leading companies and organizations in the world, including Intel, IBM, Amdocs, CA, HP, NDS, Sun Microsystems, Oracle and many others. His work has gained national fame in Israel, and he has been featured in the press regularly. Having joined Microsoft in 2000, Erez has worked for many years in Microsoft's Development Center in Israel, where Microsoft's ISA Server was developed. Being a part of the release of ISA 2000, ISA 2004 and ISA 2006, Erez held several roles, including Operation engineering, Software testing, Web-based software design and testing automation design. Now living in the United States, Erez still works for Microsoft, currently as a senior support escalation engineer for UAG. Erez is also the author of the successful "Microsoft Forefront UAG 2010 Administrator's Handbook", and the book "Mastering Microsoft Forefront UAG customizations", both published by Packt. Both books have been extremely popular with customers, and both received 5-star reviews on Amazon. Bala Natarajan is a veteran of the edge security business, having been a senior support engineer for Microsoft's edge products ISA Server, TMG and UAG for over a decade. Bala was also the Beta engineer for the UAG-based DirectAccess development, during which he acquired an experience and understanding that are second to none in this field, and also led him to become a senior product manager of Windows Server 8 DirectAccess.