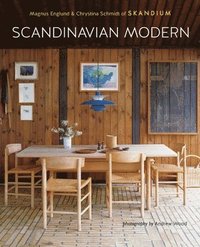 Magnus Englund, who wrote the text for this book, is a co-founder of Skandium, a British group of stores selling modern Scandinavian furniture and homeware. Born in Sweden, Magnus used to live in Stockholm, where he owned a men's fashion store. Since opening the first Skandium store in London in 1999, he has played an instrumental role in creating a renewed international interest in Scandinavian design. Magnus is now a director of the Isokon Gallery Trust in London and is working on several new books. Christina Schmidt, who sourced the locations for this book, is also a co-founder of Skandium. Finnish by nationality, she grew up in Germany and Finland and lived in Sweden before settling in Britain. Christina worked as a fashion photographer in Stockholm for many years, giving her an eye for detail that has proved most useful when developing the Skandium furniture and accessories collection. Christina now works as an interior designer in London through her own company.