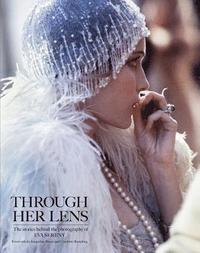 The Stories Behind the Photography of Eva Sereny

av Eva Sereny, Iconic Images
Inbunden Engelska, 2018-07-25
439
Köp
Spara som favorit
Stories and photography intermingle on the pages of this gorgeous homage to '70s and '80s cinema and celebrity. Including rare and never-before-seen images, Through Her Lens is a wonderful collection of images and memoires that capture the spirit of the age. From unexpected late-night calls from Romy Schneider, to a stay at Paul Newman's home in Connecticut; from working on set with Bernardo Bertolucci, Werner Herzog, Steven Spielberg and Sydney Pollack, to lounging poolside with Raquel Welch; Sereny reveals her favourite moments from working behind the lens. This is the first photographic retrospective of Sereny's star-studded career, including nearly 100 never-before-seen images complemented by Eva's own stories.
Visa hela texten

A new book, Through Her Lens (ACC Art Books), showcases her gift for humanizing glamour, and for capturing moments cinematic in their naturalism. Her portraits of women, including Jacqueline Bisset and Charlotte Rampling, have a fierce, intelligent sensuality, unusual at a time of mindless objectivity.--Newsweek

Eva Sereny started to pursue her career in photography in the late '60s and she quickly rose to prominence in her field, despite that photography was very much seen as a 'male' art. She shot the greatest stars of the day - Paul Newman, Marlon Brando, Jane Fonda, Robert Redford, Mia Farrow, and many more. Her work on film sets developed her passion for cinematic direction; her short film 'The Dress', starring Michael Palin, received the British Academy Award (BAFTA) and the Chicago Golden Plaque. Having her work featured on the covers of major magazines, such as The Sunday Times Magazine, Observer Magazine, Vogue, Elle, Paris Match, Harper's Bazaar, Time and Newsweek, Eva's credentials are as glittering as her photographs. Now retired and dividing her time between London, Rome and Sydney, Eva Sereny, in collaboration with Iconic Images, is proud to present Through Her Lens.