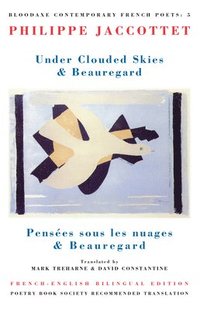 av Philippe Jaccottet
Häftad Engelska, 1994-01-01
149
Köp
Spara som favorit
Kan levereras innan julafton!
Philippe Jaccottet's poetry is meditative, immediate and sensuous. It is rooted in the Drome region of south-east France, which gives it a rich sense of place. This book brings together his reflections on landscape in the prose pieces of Beauregard (1980) and in the poems of Under Clouded Skies (1983), two thematically linked collections which are remarkable for their lyrical restraint and quiet power. Jaccottet's poetry is largely grounded in landscape and the visual world, pursuing an anxious and persistent questioning of natural signs, meticulously conveyed in a syntax of great inventiveness. His work is animated by a fascination with the visible world from which he translates visual objects into verbal images and ultimately into figures of language. His poems are highly attentive, pushing the eye beyond what it sees, enacting a rich hesitation between meaning conferred and meaning withheld. Poetry Book Society Recommended Translation. French-English bilingual edition.
Visa hela texten

'Jaccottet writes of specific landscapes, particularly of the Drome area of South [East] France but, like Norman Nicholson writing from Millom in Cumbria, gives it a universal resonance, seeing the world in the turn of the seaons on local stone, the changing light of a particular corner of sky. ' - Ian McMillan, on why he chose Under Clouded Skies for The North magazine's feature Top 30 Outstanding Books from the Last 30 Years -- Ian McMillan * The North *

Born in Switzerland in 1925, Philippe Jaccottet is one of the most prominent figures of the immediate post-war generation of French poets. He has lived in France since 1953, working as a translator and freelance writer. As well as poetry, he has published prose writings, notebooks and critical essays. He is particularly well-known as a translator from German (Musil, Rilke, Mann, Holderlin) but has also translated Homer, Plato, Ungaretti, Montale, Gongora and Mandelstam. He has won many distinguished prizes for his work both in France and elsewhere. His Selected Poems, translated by Derek Mahon, was published by Penguin in 1988. Under Clouded Skies with Beauregard, a bilingual edition of two complete volumes translated by Mark Treharne and David Constantine, was published by Bloodaxe Books in 1994.