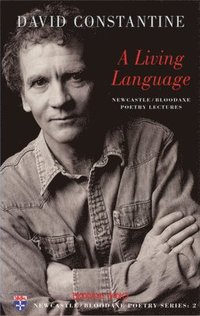 av David J Constantine
Häftad Engelska, 2004-11-01
119
Köp
Spara som favorit
Specialorder (osäker tillgång). Skickas inom 11-20 vardagar.
Fri frakt inom Sverige för privatpersoner.
In this innovative series of public lectures at Newcastle University, leading contemporary poets speak about the craft and practice of poetry to audiences drawn from both the city and the university. The lectures are then published in book form by Bloodaxe, giving readers everywhere the opportunity to learn what the poets themselves think about their own subject. David Constantine's three lectures have to do with the chief end and means of poetry: a lively and effective language. In the first, Translation Is Good For You, drawing mainly on the life, letters and poems of Keats, he considers translation as a way to a poetic identity and a language of one's own. In the second, Use and Ornament, Constantine looks at the particular case of a poet, Brecht, who wanted his writing to be useful but who understood better than most what the peculiar resources and responsibilities of the lyric poem are Wilfred Owen and Keith Douglas are also considered in this context. The third lecture, Poetry of the Present, largely concerned with Walt Whitman and D.H. Lawrence, discusses the ambition of free verse to convey the abundance and quickness of life in the truest (liveliest) way. The sonnets and other fixed forms used by Rilke are offered as an alternative. In all three lectures there is a continual effort to define the good effects a poem may have when, by whatever means, it achieves its ends.
Visa hela texten

David Constantine was born in 1944 in Salford, Lancashire. He read Modern Languages at Wadham College, Oxford, and lectured in German at Durham from 1969 to 1981 and at Oxford from 1981 to 2000. He is a freelance writer and translator, a Fellow of the Queen's College, Oxford, and was co-editor of Modern Poetry in Translation from 2004 to 2013. He lives in Oxford and on Scilly. He has published ten books of poetry, five translations and a novel with Bloodaxe. His poetry titles include Something for the Ghosts (2002), which was shortlisted for the Whitbread Poetry Award; Collected Poems (2004), a Poetry Book Society Recommendation; Nine Fathom Deep (2009); and Elder (2014). His Bloodaxe translations include editions of Henri Michaux and Philippe Jaccottet; his Selected Poems of Hoelderlin, winner of the European Poetry Translation Prize, and his version of Hoelderlin's Sophocles, these to be combined in a new expanded Hoelderlin edition, Selected Poetry (2018); and his translation of Hans Magnus Enzensberger's Lighter Than Air, winner of the Corneliu M. Popescu Prize for European Poetry Translation. His other books include A Living Language: Newcastle/Bloodaxe Poetry Lectures (2004), his translation of Goethe's Faust in Penguin Classics (2005, 2009), and his monograph Poetry (2013) in Oxford University Press's series The Literary Agenda. He has published five collections of short stories, and won the Frank O'Connor International Short Story Award in 2013 for his collection Tea at the Midland (Comma Press), and is the first English writer to win this prestigious international fiction award. Three other short story collections, Under the Dam (2005), The Shieling (2009) and In Another Country: Selected Stories (2015), and his second novel, The LIfe-Writer (2015), are published by Comma Press. His story 'Tea at the Midland' won the BBC National Short Story Award in 2010, while 'In Another Country' was adapted into 45 Years, a major film starring Tom Courtney and Charlotte Rampling.