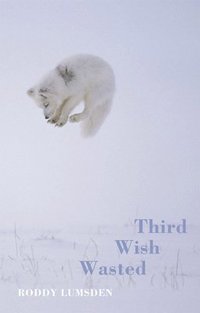 av Roddy Lumsden
Häftad Engelska, 2009-03-10
209
Köp
Spara som favorit
Finns även som
Visa alla 1 format & utgåvor
"Third Wish Wasted" is a book concerned with our wishes and desires. Belonging to a world between real and imagined folklore, the poems are by turns celebratory, humorous and beguiling, and there are bittersweet contemplations of youth, beauty and fame. Roddy Lumsden is one of the liveliest and most inventive poets writing in Britain today. His fifth collection sees him extending the range of his poetry, straying into denser and more musical territory, as well as sticking with the form and wit which typifies his earlier work. In "Third Wish Wasted" he invents and tries out various unusual and inventive forms such as charismatics, overlays and relegated narratives. There are poems composed on a top fashion shoot, inspired by travels in the USA and, as ever, he picks apart the problems between men and women.
Visa hela texten

Even in his earliest work, it isn't easy to make out the seam between talent and technique, and in the newer poems the idiom is crisp, quiet, and thoroughly annealed - There is a level of talent that will ransom any project in any school. On the one hand, it will be interesting to see where Lumsden goes next; on the other, he's so good that it hardly matters. -- D.H. Tracy * Verse * Although the verse is hopping with linguistic antics, the foci of the language are music and rhetoric and, whip-smart as these poems are, they tend to resist chin-stroking analysis. Throughout Mischief Night the rhymes, the larks, the brutal punch-lines tug Lumsden's poems off the page and into the living context they describe. -- Matthew Smith * Verse *

Roddy Lumsden (1966-2020) was born in St Andrews, and lived in Edinburgh for many years before moving to London in 1998. His first book Yeah Yeah Yeah (1997) was shortlisted for Forward and Saltire prizes. His second collection The Book of Love (2000), a Poetry Book Society Choice, was shortlisted for the T.S. Eliot Prize. Mischief Night: New & Selected Poems (Bloodaxe Books, 2004) was a Poetry Book Society Recommendation. His later collections were Third Wish Wasted (2009), Terrific Melancholy (2011), Not All Honey (2014), which was shortlisted for the Saltire Society's Scottish Poetry Book of the Year Award, and So Glad I'm Me (2017), shortlisted for the T.S. Eliot Prize 2017 and the Saltire Society Scottish Poetry Book of the Year Award 2018. His anthology Identity Parade: New British and Irish Poets was published by Bloodaxe Books in 2010. He was a freelance writer and editor, also specialising in quizzes and word puzzles, and represented Scotland twice on BBC Radio 4's Round Britain Quiz. He also held several residencies, including ones with the City of Aberdeen, St Andrews Bay Hotel, and as "poet-in-residence" to the music industry when he co-wrote The Message, a book on poetry and pop music (Poetry Society, 1999). His other books include Vitamin Q: a temple of trivia, lists and curious words (Chambers Harrap, 2004).