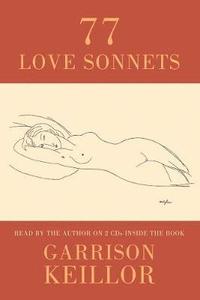 av Garrison Keillor
Häftad Engelska, 2011-01-27
169
Köp
Spara som favorit
Kan tyvärr inte längre levereras innan julafton.
'When I was 16, Helen Fleischman assigned me to memorise Shakespeare's Sonnet No. 29, When in disgrace with fortune and men's eyes, I all alone beweep my outcast stateA" for English class, and fifty years later, that poem is still in my head. Algebra got washed away, and geometry and most of biology, but those lines about the redemptive power of love in the face of shame are still here behind my eyeballs, more permanent than my own teeth. The sonnet is a durable good. These 77 of mine include sonnets of praise, some erotic, some lamentations, some street sonnets and a 12-sonnet cycle of months. If anything here offends, I beg your pardon, I come in peace, I depart in gratitude' - Garrison Keillor.
Visa hela texten

'If you've occasionally wished that the news from Lake Wobegon contained more erotic poetry - and really, who hasn't? - then you'll want to get your hands on Garrison Keillor's 77 Love Sonnets - Keillor's original poems of courtship, heartbreak and frank carnal desire, all of it well suited to the author's folksy, avuncular voice' - New York Times. 'The book proves that the sonnet is still alive and kicking. Keillor enlarges our sense of what the old 14-liner can do - After years as a poetry impresario, Garrison Keillor has blown his cover. It won't be possible to think of him anymore as only an engaging radio personality, a diverting humorist, an able novelist, essayist and political commentator, a friend of other people's verse, but as a poet of force and originality himself, a fresh and yet familiar voice to be reckoned with' - X.J. Kennedy, Contemporary Poetry Review.

Garrison Keillor is the host and writer of radio's 'A Prairie Home Companion' and 'The Writer's Almanac', and wrote the screenplay for Robert Altman's film 'A Prairie Home Companion' in which he also appears. Born in Anoka, Minnesota, in 1942, he graduated from the University of Minnesota, and lives in St Paul with his wife and daughter. Apart from a six-year radio silence, Garrison Keillor has hosted 'A Prairie Home Companion' since its debut in 1974, chronicling life in a Minnesotan small town in his weekly monologues, the inspiration for his Lake Wobegon stories and novels. His many books include 'Lake Wobegon Days' (1985), 'The Book of Guys' (1993), 'Love Me' (2003) and 'Homegrown Democrat' (2004), and two anthologies drawing on his 'Writer's Almanac' poem selections, 'Good Poems' (2002) and 'Good Poems for Hard Times' (2005). '77 Love Sonnets' (Common Good Books, USA, 2009; Bloodaxe Books, UK, 2011) is his first collection of his own poetry; he reads all the poems on two CDs issued separately from the book by Highbridge in the US but included free with Bloodaxe's UK edition.