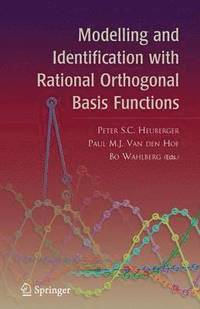 av Peter S C Heuberger, Paul M J Van Den Hof, Bo Wahlberg
Inbunden Engelska, 2005-06-01
2409
Köp
Spara som favorit
Skickas inom 3-6 vardagar.
Fri frakt inom Sverige för privatpersoner.
Finns även som
Visa alla 1 format & utgåvor
Models of dynamical systems are of great importance in almost all fields of science and engineering and specifically in control, signal processing and information science. A model is always only an approximation of a real phenomenon so that having an approximation theory which allows for the analysis of model quality is a substantial concern. The use of rational orthogonal basis functions to represent dynamical systems and stochastic signals can provide such a theory and underpin advanced analysis and efficient modelling. It also has the potential to extend beyond these areas to deal with many problems in circuit theory, telecommunications, systems, control theory and signal processing. Modelling and Identification with Rational Orthogonal Basis Functions affords a self-contained description of the development of the field over the last 15 years, furnishing researchers and practising engineers working with dynamical systems and stochastic processes with a standard reference work.
Visa hela texten

From the reviews: "The book deals with the construction and use of rational orthogonal basis functions in modelling and identification of linear dynamical systems. It is written by nine authors as a research monograph and represents a survey of the field. The framework and tools are given that make it easy to evaluate how much one gains by using orthogonal basis function models ... ." (UElle Kotta, Mathematical Reviews, Issue 2006 k)

Peter Heuberger obtained his M.Sc. degree in Mathematics at Groningen University and his Ph.D. from Delft University of Technology (both in the Netherlands). As well as his part-time position at the Delft Center for Systems and Control, he is a researcher at the Netherlands Environmental Assessment Agency in the Department of Information Services and Methodology. Paul Van den Hof has been Professor of Signals, Systems and Control at the Delft University of Technology since 1999 and th co-Director of the Center for Systems and Control since 2003. Professor Van den Hof's research interests include system identification, parametrization, signal processing and robust control design, physical measurement systems and industrial process control. He is a member of the IFAC Council (serving between 1999 and 2005), an elected member of the Board of Governors of the IEEE Control Systems Society between 2003 and 2005 and Automatica Editor for Rapid Publications. Professor Bo Wahlberg has held the Chair of Automatic Control at the Royal Institute of Technology (KTH), Stockholm since 1991. He has served as visiting professor at Stanford University and was a vice-president of KTH between 1999 and 2001. Professor Wahlberg's extensive c.v. can be found at http://www.s3.kth.se/~bo/cv.pdf