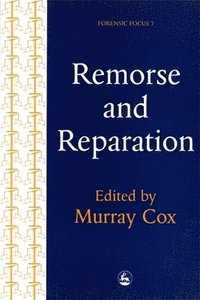 av Murray Cox
Inbunden Engelska, 1998-12-01
819
Köp
Spara som favorit
Finns även som
Visa alla 1 format & utgåvor
Remorse, or rather the lack of it, frequently features in banner headlines. But there is little systematic study of this important inter-disciplinary topic whose relevance has extensive social ramifications. Should a show of remorse by an offender be taken into account in sentencing? Is there a correlation between the experience of remorse and a diminished likelihood of re-offending? And is there a correlation between the experience and the expression of remorse? Such questions, and the complex relationship between remorse, shame, guilt and attempts at reparation, are discussed in this authoritative work. This volume is the first comprehensive attempt to bring together both forensic clinicians and those working within the criminal justice system. There is also a series of chapters by those writing from the adjacent complementary disciplines of moral philosophy, classics, Shakespeare studies, sociology and anthropology.
Visa hela texten

`Familiar though they are in literature, religion and philosophy, the phenomena of remorse and reparation are rarely explored in either the theory or practice of forensic psychotherapy. This book begins to address those omissions, dealing with clinical and legal questions and ranging widely over political, philosophical, sociological and artistic perspectivesRemorse and Reparation is very much the expression of Murray Cox's particular, and unique, talent. He would have been proud of this, his last book, even though he did not live long enough to supervise its publication. Murray has brought together authors from different disciplines to convey a myriad of views. Although occasionally contradictory, the impacts of original insights presented from several different perspectives can be stunning. This book will be a valuable addition to the literature of any forensic institution.' -- British Journal of Psychiatry `This is a book all magistrates, probation officers and QPMs should read. It consists of 15 short and mostly readable essays, looking at a little-considered aspect of human experience from medical, legal, sociological and philosophical points of view. The case studies quoted are very much to the point ... Two essays particularly impressed me. David Tidmarsh, now of the Parole Board, was formerly on the staff of Broadmoor Hospital. He draws attention to the lack of reference to remorse in the Board's remit, which is concerned only with risk ... John Harding of the Inner London Probation Service quotes examples, including two well-known ones from Barlinnie, where moral reformation has occurred.' -- Newsletter of Quakers in Criminal Justice

Murray Cox M.A.F.R.C.Psych.M.Inst.G.A.(Hon) was Consultant Psychotherapist at Broadmoor Hospital from 1970 to 1997. He edited Shakespeare Comes to Broadmoor and Forensic Psychotherapy: Crime Psychodynamics and the Offender Patient (jointly with Christopher Cordess) and wrote Shakespeare as Prompter and Mutative Metaphors in Psychotherapy with Alice Theilgaard, all published by Jessica Kingsley.