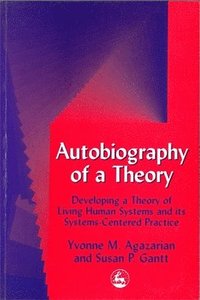 Autobiography of a Theory

av Yvonne M Agazarian, Susan Gantt
Häftad Engelska, 2000-06-01
469
Köp
Spara som favorit
Finns även som
Visa alla 1 format & utgåvor
Systems-centred practice and its theory are one of the most important developments in group psychology in the last forty years. In this book Yvonne Agazarian traces the evolution of her ideas and their application to create a meta-theory, the theory of living human systems. Autobiography of a Theory follows Agazarian as she thinks her way through different stages, creating a theoretical background for SAVI (System for Analyzing Verbal Interaction), which she developed with Anita Simon, developing a theory of the Invisible Group for the book she wrote with Richard Peters and expanding on existing group dynamics theories. With members of the General Systems Committee of the American Group Psychotherapy Association, she joined the challenge of formulating a systems theory for group and arrived at her theory of living human systems from which she derived the methods and techniques of systems-centred therapy for groups and individuals. This fascinating account of her professional life not only documents major developments in group analysis, but also shows how a theory is formulated from intellectual and personal contexts, and how a theory-based practice is generated.
Visa hela texten

She traces in this book the history of the development of her ideas including her system for analysing verbal interactions (SAVI), the concept of the invisible group, system-centred therapy for groups and, most inclusively, a meta theory of living human systems. The book commences with a very personal introduction and seeks to trace the development of her ideas by following a chronological pathway through her life. It probably provides the best overview of her work currently available as well as a "blow by blow" account of how it evolved. -- Changes This is quite simply a remarkable book. Forming Volume 11 of the International Library of Group Analysis, Autobiography of a Theory is part of a rich group analytic tradition at the Jessica Kingsley publishing house. The remarkable nature of the book lies within the first-person narrative approach adopted by the authors. They do not seem to present a theory and its development, but instead share with the reader the autobiography of that theory, how it came to be what it was it was and was not, the blind alleys as well as the moments of inspiration, and above all, the human beingness of the architect of the theory and the influence this human sentience and experience held over the theory's genesis. The stage is clearly set within the introduction, when Agazarian reflects on the world as she saw it through the eyes of a child, but with the superimposed interpretations of adult hindsight, and the resultant musings and retrospective attributions that this was where her theorising began. She then goes on to describe SAVI (the System for analyzing Verbal Interactions), which formed the methodological basis from which her explorations of the role of communication within group dynamics was conducted. This led to the theory of the invisible group, differentiating between individual dynamics within a group setting, and genuine group dynamics. Next, drawing from the systems theory literature, Agazarian describes how her attention moved on to the development of the meta-theory (ie an umbrella theory to cover a number of other theories) of living human systems, and its implications for individual and group psychotherapy. She argues that the single greatest contribution of this approach was the recognition that it was not human dynamics alone that determined the successful course of therapy, but rather also the existential and environmental context in which those dynamics occurred. This is not an easy book to read, and certainly the demands it places on the intellect in attempting to hold in mind the many simultaneous but differing perspectives from which it is written requires an intellectual flexibility not easily achieved. However, for aficionados of group analysis, the book may be heartily recommended. It describes the ontogenesis of the meta-theory of living human systems in such a way that the process of theoretical development is laid bare and hence presented as "messy" and real, rather than as polished and meticulously linear, as is so often the misleading case made elsewhere. -- P sych-talk

Yvonne M. Agazarian, EdD, is a consulting affiliate to the Friends Hospital, Philadelphia and the Director of the Systems-Centered Training Institute. She teaches, trains and supervises systems-centred therapists internationally, and practises in Philadelphia, USA. She has developed the theory of living human systems and its systems-centred practice. She co-authored The Visible and Invisible Group in 1981 and wrote Systems-centered Therapy for Groups, published in 1997. Also in 1997 she received the Group Psychologist of the Year award from the American Psychological Association for her involvement in research, publication, teaching and training. She exemplifies the finest in scholarship in the discipline of psychology. As a group psychologist she has contributed to expanding our knowledge of the boundaries between clinical and social psychology with the investigation of living human systems and systems-centered group and individual therapy. Her considerable body of work illustrates the highest blend of creativity and learning'. Susan P. Gantt, PhD, is a psychologist and Assistant Professor in Psychiatry at Emory University School of Medicine in Atlanta, USA, where she co-ordinates group psychotherapy training. She is Board Certified in Group Psychology through the American Board of Professional Psychology. In private practice she works as a licensed practitioner in systems-centred group, couples and individual therapy and as a trainer and conference director in systems-centred training in the US and Britain.

1. Curiosity: Early musings. 2. Trying to make it make sense: Discrimination and integration. 3. First theory: Group as a function of interdependence of parts. 4. Second theory: Group-as-a-whole. 5. Third theory: Bridge construct of role between individual and group. 6. Thinking systems: The gap between theory and practice. 7. A theory of living human systems: A meta-theory. Index.