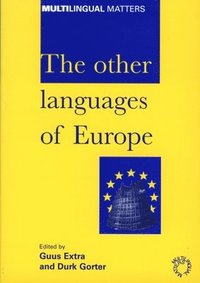 The Other Languages of Europe

av Guus Extra, Durk Gorter
Häftad Engelska, 2001-01-01
459
Köp
Spara som favorit
Kan levereras innan julafton!
The book offers demographic, sociolinguistic, and educational perspectives on the status of both regional and immigrant languages in Europe and in a wider international context. From a cross-national point of view, empirical evidence on the status of these other languages of multicultural Europe is brought together in a combined frame of reference.
Visa hela texten

Guus Extra is director of Babylon, Center for Studies of Multilingualism in the Multicultural Society at Tilburg University (the Netherlands) and professor of language and minorities at the same university. Durk Gorter is head of the Social Sciences research group at the Fryske Akademy/Universiteit van Amsterdam and part-time professor of Frisian sociolinguistics at the Universiteit van Amsterdam. He has published on the sociolinguistics of Frisian, minority languages in Europe, trilingual education and language policy.The articles are written by experts on sociolinguistics and applied linguistics who are all involved in the study of multilingualism in its social context.