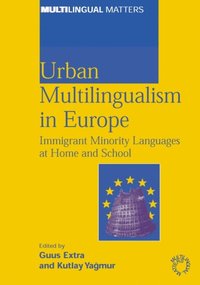 av Prof Guus Extra, Dr Kutlay Yagmur
E-bok (PDF - DRM), Engelska, 2004-08-20
179
Ladda ned
Spara som favorit
Laddas ned direkt
Läs i vår app för iPhone, iPad och Android
Finns även som
Visa alla 2 format & utgåvor
This book focuses on the increase of urban multilingualism in Europe as a consequence of processes of migration and minorisation. It offers multidisciplinary, crossnational and crosslinguistic perspectives on immigrant minority languages at home and in school in six multicultural cities across Europe. In each of these cities, Germanic or Romance languages have a dominant status in public life. This Multilingual Cities Project is based on large-scale empirical findings and has been carried out under the auspices of the European Cultural Foundation, in Amsterdam.Part I offers multidisciplinary background information on phenomenological, demographic, language rights and educational aspects of the status of immigrant minority communities and their languages in a variety of international contexts.Part II offers methodological considerations on the Multilingual Cities Project. In addition, it presents both national and local perspectives on multilingualism in each of the six cities under consideration. Each chapter provides information on the distribution and vitality of immigrant minority languages spoken at home and on the status of these languages in primary and secondary schools.Part III offers crossnational and crosslinguistic perspectives on the twenty most prominent languages that emerge from the study. The focus is again on the two major private and public domains in which language transmission may or may not occur: the home and the school, respectively. The book offers a challenging outlook on the educational management of language diversity in the increasingly multicultural and multilingual context of European nation-states.
Visa hela texten