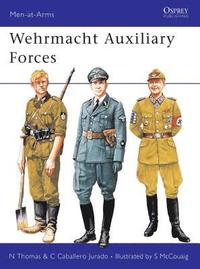 DR NIGEL THOMAS is an accomplished linguist and military historian and is currently a Senior Lecturer in charge of the Business Language Unit at the University of Northumbria, Newcastle. His interests are 20th century military and civil uniformed organisations, with a special interest in Germany, Central and Eastern Europe. He was recently awarded a PhD on the Eastern Enlargement of NATO. Carlos Caballero Jurado was born in Ciudad Real, Spain, in 1957. He served as an NCO in the Spanish Army's Division Brunete (1st Armoured Division) and later graduated with a BA in History from the University of Alicante. He has written and co-written numerous books and articles on military historical subjects, including four Osprey titles. Carlos is a history teacher in Alicante, Spain.