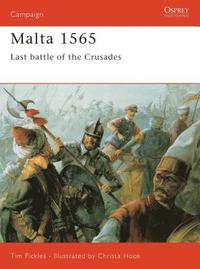 Last Battle of the Crusades

av Tim Pickles, David Chandler
Häftad Engelska, 1998-01-01
269
Köp
Spara som favorit
Skickas inom 3-6 vardagar.
Fri frakt inom Sverige för privatpersoner.
Osprey's Campaign title for the Battle of Malta (1565). The epic siege of the island fortress of the Knights Hospitaller by the huge Turkish Army of the Emperor Suliman is one of the most compelling stories in the history of the western world. The Turks amassed an army of 30,000 men, which doubled as the siege dragged on. The knights facing them totalled 500, along with 4,000 Maltese levies and 4,500 other troops. Tim Pickles describes how despite constant pounding by the massive Turkish guns and heavy casualties, the Knights managed to hold out.
Visa hela texten

Tim Pickles, a Yorkshireman by birth, now resides in New Orleans, USA. He worked for many years as a figurine modeller but now specialises as an historical consultant, battle co-ordinator and costume designer in the film industry. He was one of the founders of the Napoleonic Association, undertaking the role of Wellington, commanding British forces at re-enactments between 1990 and 1995.