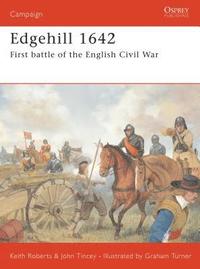 The battle of Edgehill was the first major clash of the English Civil Wars, and the general belief in 1642 was that the developing tension between King and Parliament would be resolved in a single battle. On 23 October 1642 the Royalist and Parliamentary Armies met at Edgehill. Much of the Parliamentary cavalry was driven off, but units under Sir William Balfour's command remained behind and, protected by the infantry, slammed into the Royalist infantry. The battle did not prove as decisive as anticipated, setting the stage was set for a prolonged and bloody civil war.
Visa hela texten

Graham Turner was born in Harrow in 1964, the son of the respected aviation artist Michael Turner with whom he shares an interest in motorsport illustration. A freelance artist since 1984. Graham specialises in historical and military subjects, particularly of teh medieval period, and has illustrated several Osprey titles including Campaign 44 'Pavia 1525', Men-at-Arms 310 German Medieval Armies 1000-1300' and Men-at-Arms 320 'Armies of the Caliphates 862-1098'. He lives with his wife and two children in Buckingharnshire. John Tincey and Keith Roberts are two of the most highy respected if English Civil War Historians. They have spent more than a decade studying the civil wars in the British Isles, and have published a number of books and articles on the subject.