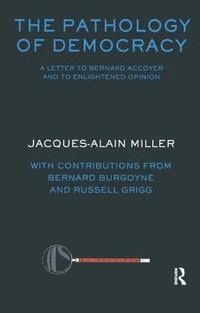 The Pathology of Democracy

On Wednesday 8 October 2003, the French National Assembly passed a bill intended to regulate, for the first time, the practice of psychotherapy in France. Moved by Bernard Accoyer, the purpose of the legislation was to restrict the practice of psychotherapy to psychiatrists and clinical psychologists; it would effectively no longer be legal for any other practitioners, including psychoanalysts, to practice in the sphere of mental health. This volume contains Jacques-Alain Miller's letter to Bernard Accoyer, opposing the bill. Contributions from Bernard Burgoyne and Russell Grigg are also included, examining the implications of such a bill for France and for elsewhere.

Bernard Burgoyne is a psychoanalyst practising in London. He is a Member of the World Association of Psychoanalysis, and a founder member of the Centre for Freudian Analysis and Research. He was educated at the University of Cambridge, the London School of Economics, and the University of Paris, and is currently Emeritus Professor of Psychoanalysis in the Institute for Health and Social Science Research at Middlesex University. He has published extensively on questions of structure in psychoanalysis, and is particularly concerned with the way in which the predicaments of human interactions are resolvable only by a consideration of the frontiers of desire and the texture of space. Russell Grigg lectures in philosophy and is the co-ordinator of psychoanalytic studies at Deakin University, Australia. Dr Grigg has a PhD in psychoanalysis and has published extensively on psychoanalysis. He is also known for his translations of the seminars of Jacques Lacan. He is currently a psychoanalyst in private practice.

Preface -- Acknowledgements -- Introduction /Margaret Rustin -- Theoretical Overview /Alex Dubinsky -- The Technique of Child Psychotherapy /Susan Reid -- Part I. Psychosis and Sexual Abuse -- 1. Finding a Safe Place: A Four-Year-Old Child's Recovery from Sexual Abuse /Deborah Sussman -- 2. The Difficulty of Establishing a Space for Thinking: The Therapy of a Seven-Year-Old Girl /Lynda Miller -- 3. Survival of the Self: A Sixteen-Year-Old Girl's Search for a Good Object /Chriso Andreou -- Discussion /Alex and Hbl2ne Dubinsky -- Part II. Psychosis and Developmental Delay -- 4. The Beginnings of Mind: Psychotherapy of a Sexually Abused Six-Year-Old Girl /Ann Wells -- 5. Symbolisation and the Sense of Identity /Daphne Briggs -- 6. 'Here 1 am!': Self and Object in a Developmentally Delayed Boy with Autistic Features /Sara Rance -- 7. A Little Boy Who Did Not Want to Learn Anything /Alex Dubinsky -- Discussion /Maria Rhode -- Part 111. The Complexity of Psychotic States -- 8. Psychosis and Autism: Schizophrenic, Perverse and Manic- Depressive States During Psychotherapy /Genevihe Haag -- 9. Jeremy and the Bitten Roof /Hbldne Dubinsky -- 10. 'The Ghost is Coming': The Fear of Annihilation in a Nine-Year-Old Boy /S.M.S henuin-White -- 11. Going to Pieces: Autistic and Schizoid Solutions /Maria Rhode -- 12. Rigidity and Stability in a Psychotic Patient: Some Thoughts about Obstacles to Facing Reality in Psychotherapy /Margaret Rustin -- Discussion /Margaret Rustin -- Postscript /Margaret Rustin -- Glossary /Maria Rhode -- References -- Index.