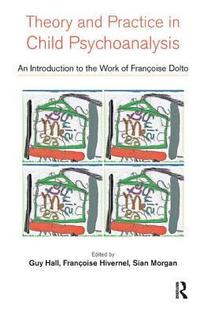 Theory and Practice in Child Psychoanalysis

An Introduction to the Work of Francoise Dolto

av Guy Hall, Francoise Hivernel, Sian Morgan
Häftad Engelska, 2009-10-31
479
Köp
Spara som favorit
Skickas inom 10-15 vardagar.
Fri frakt inom Sverige för privatpersoner.
Finns även som
Visa alla 2 format & utgåvor
During her lifetime Francoise Dolto revolutionized the psychoanalytic understanding of childhood. As an early pioneer, she emphasized that the child is to be recognized from birth as a person. As a gifted and innovative clinician, Dolto developed her ideas about the unconscious image of the body. An image that is unique to each individual and linked to both a person's history and narcissism, rather then their physicality. It is the symbolic incarnation of a person's desires. Dolto began her career as a member of the IPA, was admired by Winnicott, close to Lacan and influenced by Morgenstern. Her life witnessed an extraordinary evolution from the conservatism of her parents, through the second World War, to the turbulence of Paris in the 1950s and 60s. In the succeeding years, Dolto made a number of original contributions to the understanding of psychosis, neonatology, female sexuality, education, and religion. Although controversial, she was able to write both for the general public and for professional colleagues.
Visa hela texten

'This book has a task that should strike us as odd: to introduce the work of an extremely famous French psychoanalyst whose name is a continental household word. A clinical and theoretical practitioner whose influence on the understanding and care of babies, infants and children is unsurpassed, is virtually unknown in Britain. Why is Dolto unknown? The reasons are surely multiple but the puzzle remains. Is there something alien here to British sensibilities? As her absence from our culture and practices is a serious problem, the question is worth asking.'Donald Winnicott, her rival in this field, famously dismissed her as too intuitive; this is incorrect because, like the object of her research, she is intensely engaged in the process whereby language turns feelings into thoughts. The observations of Winnicott, Klein and Tustin on the one hand, and Dolto on the other, overlap or are compatible - the intellectual framework within which they are understood is different; the concept of the child is not the same. The cross-channel contributors of this volume have set themselves a crucial and difficult task: to introduce a writer who thinks differently. The result is fascinating and important.'- From the foreword by Juliet Mitchell