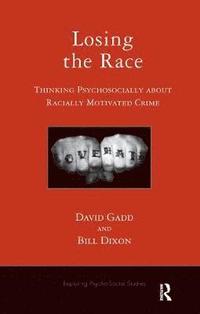 av David Gadd, Bill Dixon
Häftad Engelska, 2010-11-15
379
Köp
Spara som favorit
Skickas inom 5-8 vardagar.
Fri frakt inom Sverige för privatpersoner.
Finns även som
Visa alla 3 format & utgåvor
Based on a two-year research project funded by the Economic and Social Research Council (ESRC), this book explores why many of those involved in racially motivated crime seem to be struggling to cope with economic, cultural and emotional losses in their own lives. Drawing on in-depth biographical interviews with perpetrators of racist crimes and focus group discussions with ordinary people living in the same communities, the book explores why it is that some people, and not others, feel inclined to attack immigrants and minority ethnic groups. The relationships between ordinary racism, racial harassment and the politics of the British National Party are also explored, as are the enduring impacts of deindustrialisation, economic failure and immigration on white working class communities. The book assesses the legacy of New Labour policy on community cohesion, hate crime and respect in terms of its impact on racist attitudes and racist incidents, and explores how it is that racist attacks, including racist murders, continue to happen.
Visa hela texten

Dr Bill Dixon is a Senior Lecturer in Criminology and Head of the School of Sociology and Criminology at Keele University. He has lived in Delhi, London and Cape Town and worked in a neighbourhood advice centre and as a local government officer. Together with Elrena van der Spuy he is the editor of 'Justice Gained? Crime and Crime Control in South Africa's Transition'. Dr David Gadd is Senior Lecturer in Criminology and Deputy Director of the Social Science Research Institutes at Keele University. David has over a decade of experience of conducting and analyzing in-depth interview research with offenders, and has written extensively on the subjects of domestic abuse, masculinities and crime, racial harassment, offender motivation and desistance from crime. David's first book (co-written with Tony Jefferson) 'Psychosocial Criminology' was published in 2007.