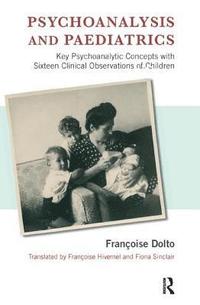 av Francoise Dolto
Häftad Engelska, 2013-01-01
399
Köp
Spara som favorit
Skickas inom 10-15 vardagar.
Fri frakt inom Sverige för privatpersoner.
Finns även som
Visa alla 2 format & utgåvor
This book is the author's 1939 medical thesis and is dedicated to medical practitioners, paediatricians, and parents without prior knowledge of psychoanalysis. The author's aim was to sensitise people to the unconscious dimensions of many problems in children. She demonstrates here, through sixteen case studies, how often children's difficulties at school and at home - be they behavioural or due to impaired learning abilities - are the expression of psychological issues linked with their developing sexuality and castration anxiety, and result in physical symptoms such as enuresis and encopresis. The author points out that the awareness of the self and self-responsibility often develops for young people in families in which the parents do not know how to listen or even more importantly cannot be listened to with trust. There is also a summary of Freud's theories of the different stages of the evolution of the drives, as well as the central developmental role played by the castration complex, castration anxiety, and the Oedipus Complex.
Visa hela texten

This book is supported by the French Ministry of Foreign Affairs, as part of the Burgess programme run by the Cultural Department of the French Embassy in London - www.frenchbooknews.com

Francoise Dolto began her career as a member of the International Psychoanalytical Association, was admired by Winnicott, close to Lacan, and influenced by Morgenstern. Her life witnessed an extraordinary evolution from the conservatism of her parents, through the Second World War, to the turbulence of Paris in the 1950s and 1960s. In the succeeding years, Dolto made a number of original contributions to the understanding of psychosis, neonatology, female sexuality, education, and religion. Although controversial, she was able to write both for the general public and for professional colleagues. In 1979, Dolto opened La Maison Verte as a specialist centre for the practical application of her theories. Similar centres have since been created around the world. Dolto continued to write and teach until her death in 1988. Francoise Hivernel graduated as a Psychoanalytic-Psychotherapist from the Contemporary Freudian Training of the West Midlands Institute and is a member of the Forum for Independent Psychotherapists. She is also a member of Cambridge Analysis and works in private practice in Cambridge with adults. Fiona Sinclair has been in clinical practice for many years, teaching and supervising trainee psychotherapists. She previously held an honorary psychotherapist post in the Young Children's Service and in the Psychotherapy Department, Fulbourn and Addenbrookes Hospitals, Cambridge. She is a founder member of the Site for Contemporary Psychoanalysis.