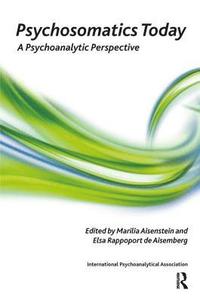 av Marilia Aisenstein, Elsa Rappoport De Aisemberg
Häftad Engelska, 2010-07-01
389
Köp
Spara som favorit
Skickas inom 10-15 vardagar.
Fri frakt inom Sverige för privatpersoner.
Finns även som
Visa alla 3 format & utgåvor
Psychosomatics have classically been of peripheral importance within our wellknown theoretical models, despite the fact that they do have a history in the field of psychoanalysis. This might be owing to the fact that Freud did not explicitly approach psychosomatics and, in consequence, did not put forward any hypotheses within his theoretical body. However, the Freudian concepts of actual neuroses and mixed neuroses are a basis in order to understand psychosomatic phenomena. The same could be said about the connections established with subsequent Freudian theoretical models, such as: the introduction of narcissism, unresolved mourning processes, early trauma and the action of Thanatos.
Visa hela texten

Contributors: Madeleine Baranger, Catalina Bronstein, Claudio Laks Eizirik, Andre Green, Lila J. Kalinich, Ruggero Levy, Evelyne Sechaud, Claude Smadja, Gerard Szwec, Graeme J. Taylor'Psychoanalysts work more and more with patients presenting psychosomatic disorders. Present day descriptive and classificatory psychiatry tends to see only one clinical frame under the confusing term of somatisation. But since Freud, psychoanalysis has helped us to understand the complexity and the diversity of psychopathological organizations which may have somatising consequences (conversion hysteria, essential depression, functional disorders, hypochondria, etc). The book which Marilia Aisenstein and Elsa Rappoport de Aisemberg present here, gives us a modern view in direct line with all the previous researches, showing us how we can rethink this plurality. Authors who have found their main source, either in the Paris Psychosomatic School, or in the long tradition of South American studies, mainly in Argentina, all bring in their own manner an original theoretical reflection on this subject. The reader will also profit from their very interesting clinical cases. This book throws a new light, of great interest, on a field where there have been few recent publications.'- Daniel Widlocher, Past President of Association Psychanalytique de France (APF) and the International Psychoanalytical Association'From its beginnings, psychoanalysis has been interested in the relationship between the mind and the body. However, Freud's attention to pathology focused on psychopathology, with little interest in somatic disorders. Others - particularly Alexander - have attempted to develop theories of psychosomatics, but it was particularly the Paris school, and Pierre Marty, who developed a truly psychoanalytic theory of psychosomatics. This volume provides an important introduction, summary and critique of that work, and also offers perspectives on it from around the world. Beginning with a paper by Andre Green that was originally written as his contribution to a debate with Pierre Marty that never occurred due to the latter's death, it continues with five papers from Paris and five from England, Latin America and North America. They provide theory, clinical reports and contrasting approaches. I know of no finer introduction to contemporary psychosomatics'- Robert Michels, MD, University Professor of Medicine and of Psychiatry at Weill Cornell Medical College and a Training and Supervising Psychoanalyst at the Columbia University Center for Psychoanalytic Training and Research