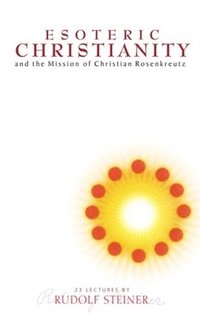 Esoteric Christianity and the Mission of Christian Rosenkreutz

av Rudolf Steiner
Häftad Engelska, 2000-11-01
219
Köp
Spara som favorit
Finns även som
Visa alla 1 format & utgåvor
In addition to the outer manifestation of Christianity as we know it from history, there exists a second, hidden stream of Christian thought and development, sometimes referred to as 'esoteric Christianity' or 'Rosicrucian Christianity'. Displaying an intimate knowledge of his subject, Rudolf Steiner throws light on this once secret, spiritual movement. But rather than relying on historical tradition or teaching, he presents wisdom and insight directly from the original metaphysical sources of esoteric Christianity. In these dynamic lectures, Steiner describes the influence of Christ's power throughout history, the workings of karma, the role of the Buddha and the Bodhisattvas, as well as the vital work of Christian Rosenkreutz, Jeshu ben Pandira and other key historical figures. This new edition - indispensable for serious students of esotericism - contains all 23 lectures and addresses of the original German collection. It features previously scattered, classic lectures such as 'The Etherisation of the Blood', 'Faith, Love, Hope' and 'Cosmic Ego and Human Ego'.
Visa hela texten

Rudolf Steiner (1861-1925) was born in the small village of Kraljevec, Austro-Hungarian Empire (now in Croatia), where he grew up. As a young man, he lived in Weimar and Berlin, where he became a well-published scientific, literary, and philosophical scholar, known especially for his work with Goethe's scientific writings. At the beginning of the twentieth century, he began to develop his early philosophical principles into an approach to systematic research into psychological and spiritual phenomena. Formally beginning his spiritual teaching career under the auspices of the Theosophical Society, Steiner came to use the term Anthroposophy (and spiritual science) for his philosophy, spiritual research, and findings. The influence of Steiner's multifaceted genius has led to innovative and holistic approaches in medicine, various therapies, philosophy, religious renewal, Waldorf education, education for special needs, threefold economics, biodynamic agriculture, Goethean science, architecture, and the arts of drama, speech, and eurythmy. In 1924, Rudolf Steiner founded the General Anthroposophical Society, which today has branches throughout the world. He died in Dornach, Switzerland. Matthew Barton is a translator, editor, teacher, and poet, and taught kindergarten for many years at the Bristol Waldorf School. His first collection of poems was Learning To Row (1999). He has won numerous prizes for his work, including an Arts Council Writer's Award and a Hawthornden Fellowship.