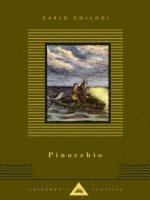 av Carlo Collodi
Inbunden Engelska, 2010-10-07
129
Köp
Spara som favorit
Finns även som
Visa alla 8 format & utgåvor
Everyone knows Pinocchio, the walking, talking wooden puppet carved from a table leg. Pinocchio, an endearing scamp, is always getting himself into trouble. But it isn't the sort of trouble most kids get into. Skiving off school, he is kidnapped by a puppeteer, robbed by a Cat and Fox, and persuaded to visit an earthly paradise where naughty children have perpetual fun - and turn into donkeys. Sold to a circus, then to a man who tries to drown him for his donkey-skin, he miraculously turns back into a puppet and goes in search of his 'father' (whom he must rescue from the belly of a giant dogfish ...). Throughout these manic adventures he is haunted by the ghost of a Talking Cricket he has crushed to death for giving good advice, and watched over by his personal guardian fairy. All the while, Pinocchio dreams of becoming a real boy. Told with wit and humour, his story is also a moral fable about making the right choices, and what it is to be a loving human being. Pinocchio is an astonishing work of fantasy which has been toned down and sentimentalized over the years, not least by the Walt Disney film. Everyman returns to a beautifully illustrated early translation of 1916 which captures the vivid inventiveness of Collodi's original.
Visa hela texten

Italian author and journalist. Carlo Collodi was born Carlo Lorenzini in Florence, the son of Domenico Lorenzini, a cook, and Angela Orzali, a servant. Collodi was the first of ten children At the age of 22, he became a journalist to work for Italian independence struggle, and in 1848 he founded the satirical journal Il Lampione, which was suppressed in 1849. In 1861, when Italy became a united nation, Collodi gave up journalism, and after 1870 he settled down as a theatrical censor and magazine editor. He turned soon to children's fantasy, translating Italian versions of the fairy tales of the French writer Charles Perrault. The original illustration for Pinnocchio was made by Eugenio Mazzanti (1883). The story was translated into English in 1892 by M.A. Murray. - Collodi died in Florence on October 26, 1890. He never married.