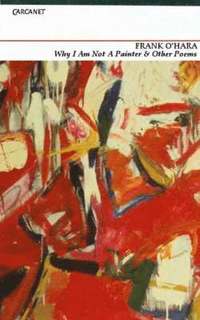 Why I am Not a Painter and Other Poems

av Frank O'Hara
Häftad Engelska, 2003-04-01
119
Köp
Spara som favorit
Skickas inom 5-8 vardagar.
Fri frakt inom Sverige över 159 kr för privatpersoner.
Frank O'Hara (1926-66) composed poems 'any time, any place', collaborating with and inspired by a circle of artists, musicians and poets, immersed in the creative life of New York. For O'Hara, the city was a place of possibility, both disorientating and exciting, and his poems have an immediacy that draws its energies from the pace and rhythms of city life, and from the contemporary artforms of jazz, film and painting. It is this openness to experience that makes O'Hara an indispensable poet of the imaginative experience of the modern city. Reviewing this new selection in the Guardian, Charles Bainbridge wrote: 'Frank O'Hara is a wonderful poet - funny, moving, chatty, engaging, enthusiastic, risk-taking, elegiac, supremely urban - and anything that encourages people to read him is a good thing. His poems have a disarming intimacy, a kind spontaneous enthusiasm and his work proves, with tremendous elan and energy, that you don't have to adopt a solemn tone in order to write poetry of seriousness and purpose. As O'Hara himself says of the nature of writing in the brilliantly comic "Personism: A Manifesto": "You just go on your nerve. If someone's chasing you down the street with a knife you just run, you don't turn around and shout, 'Give it up! I was a track star for Mineola Prep'." '
Visa hela texten

Born in Maryland in 1926, Frank O'Hara studied first music, then English, at Harvard, publishing his first book of poems in 1952. He worked at the Museum of Modern Art in New York, edited Art News, wrote extensively on painting, and pursued his interest in theatre. He died in 1966. Most of his poetry, collected by Donald Allen, appeared posthumously.