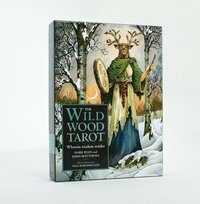 av Mark Ryan, John Matthews
(1 röst)
Cards Engelska, 2011-03-01
299
Köp
Spara som favorit
Skickas inom 5-8 vardagar.
Fri frakt inom Sverige för privatpersoner.
To walk among the age-old trees of the wildwood is to journey back in time. In this eye-catching deck, previously known as The Greenwood Tarot, Mark Ryan and John Matthews reawaken the classic forest archetypes of the Green Man and Woman, the Archer, the Hooded Man and the Blasted Oak. Will Worthington's rich and vivid images bring this ancient world back to life and make it possible to feel the magic and power of the wildwood. THE WILDWOOD TAROT draws inspiration from pre-Celtic mythology and a belief system steeped in shamanic wisdom and forest lore. It connects us with a long-lost world - as we seek to make sense of our own.
Visa hela texten

John Matthews is a leading authority on Grail and Arthurian legends and acted as advisor on several motion pictures, including Jerry Bruckheimer's King Arthur. John was the author of a number of successful divinatory systems based on early spiritual beliefs. Mark Ryan has enjoyed an eclectic entertainment career, working in the international theatre, fim and television industries for thirty years. Mark was one of the original authors of The Greenwood Tarot. Will Worthington has worked as an illustrator for thirty years. He has contributed illustrative work to many titles including The Druid Animal Oracle and The Green Man Tree Oracle.