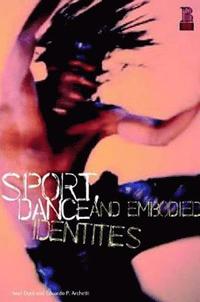 av Noel Dyck, Eduardo P Archetti
Häftad Engelska, 2003-07-01
389
Köp
Spara som favorit
Finns även som
Visa alla 3 format & utgåvor
Sport and dance command the passions and devotion of countless athletes, dancers and fans worldwide. Although conventionally thought to reside within separate social realms, these two embodied cultural forms are revealed in this benchmark volume to share a vital capacity to constitute and express identities through their practiced movements and scripted forms. Thus, the work of choreographers and coaches along with the performances of dancers and athletes offer not merely entertainment and aesthetic accomplishment but also powerful means for celebrating existing social arrangements and cultural ideals or, alternately, for imagining and advocating new ones.Drawing on a wide selection of sport and dance activities from around the world, this book elucidates the ways in which embodied performances both mirror and reshape social life. It traces, for example, how football, salsa and tango can each be employed to articulate or rewrite national and gender identities. Also examined are children's sport and the dynamics by which immigration and cultural integration, along with the socialization of children and youth, may be directed through the organization of community sport. The volume investigates the marshalling of sport and dance in settings from Africa to Ireland as vehicles for framing moral issues that revolve around the appropriate use, protection and exhibition of the body. This innovative study establishes the paradoxical fashion in which dance and sport can unite certain people and communities while at the same time serving exclusionary and nationalistic purposes.
Visa hela texten

'This volume makes a welcome contribution to the field by bringing studies of sport and dance to the fore and theorising them as fields of social and political negotiation and struggle.'Nicolas Argenti, Brunel University 'Because a good proportion of the chapters link sport and dance to such diverse but core issues as nationalism, memory, political violence, modernity, transnational flows and post-colonial and post-modern identities, this book will interest a much wider audience than specialists in embodied practice'Nicolas Argenti (Brunel University) - Social Anthropology Journal 'Sport, dance, and embodied identities, a collection of theoretically sophisticated and ethnographically rich essays, serves as a welcome addition to the burgeoning fields of the anthropology of sport, body, and dance.'Laura Spielvogel, The Journal of Royal Anthropological Institute

ContentsNotes on ContributorsIntroduction1 Introduction:Embodied Identities: Reshaping Social Life Through Sport and DanceNoel Dyck and Eduardo ArchettiPart I: Training Children's Bodies and Selves2Bodying Forth a Room for Everyone: Inclusive Recreational Badminton in CopenhagenSally Anderson3Embodying Success: Identity and Performance in Children's SportNoel Dyck4Embodied Play and Gender Identities in Competitive Handball for Children in NorwayHarald Beyer BrochPart II: Reshaping Adult Identities5Long-distance Football Support and Liminal Identities Among Norwegian FansHans Hognestad6'Ladies, Just Follow His Lead!': Salsa, Gender and IdentityHeike Wieschiolek7The Aikido Body: Expressions of Group Identities and Self-Discovery in Martial Arts TrainingTamara Kohn8The Embodiment of Male Identities: Alliances and Cleavages in Salvadorean FootballHenrik RonsboPart III: Embodying the National9The Irish Body in Motion: Moral Politics, National Identity and DanceHelena Wulff10Football, Nation and Identity: German Miracles in the Post-war EraWerner Krauss11Playing Football and Dancing Tango: Embodying Argentina in Movement, Style and IdentityEduardo Archetti12Michezo: Dance, Sport and Politics in Dar-es-Salaam, TanzaniaAnne Leseth/tocNotes on ContributorsSally Anderson is a Research Fellow in the Department of Anthropology, University of Copenhagen. She has conducted ethnographic research in Scandinavia for three decades, including initial work on Saami identity and cultural revitalization. Her book, I en klasse for sig (In a Class of Their Own) (2000) examines cognitive and interactional models afforded by the organization of ongoing class groups in Danish grade schools. Her doctoral dissertation, Civilizing Children: Children's sport and civil sociality in Denmark, explores the political and moral organization of children's sport.Eduardo P. Archetti is a Professor of Social Anthropology at the University of Oslo. He has written extensively on society and culture in Argentina and Ecuador. He has also investigated the meaning of sport and dance for national representations and identities. His most recent books are Guinea Pigs. Food, Symbol and Conflict of Knowledge in Ecuador (1997), Masculinities: Football, Polo and the Tango in Argentina (1999) and El potrero, la pista y el ring. Las patrias del deporte argentino (2001). He has extensive experience of both playing football and dancing tango.Harald Beyer Broch is an Associate Professor of Social Anthropology at the University of Oslo. He has conducted field research in Indonesia, Canada and Norway and is the author of Growing Up Agreeably: Bonerate Childhood Observed (1990), Woodland Trappers: Hare Indians of Northwestern Canada.(1998), and Jangan Lupa: An Experiment in Cross Cultural Understanding (2002). He competed at the national level in Norway in cross-country skiing as a junior and, as an adult, was an elite middle distance runner (800m) in the 1960s.Noel Dyck is a Professor of Social Anthropology at Simon Fraser University in Canada. The author of several books on relations between Aboriginal peoples and governments, he was drawn to the anthropology of sport through his children's participation and his own subsequent involvement as a coach in youth soccer and track and field. He is the editor of Games, Sports and Cultures (2000) and is currently completing a study of adults and the social construction of children's sports.Hans Hognestad is a social anthropologist and Research Fellow at the Norwegian University of Sport and Physical Education in Oslo. He has written articles on football fan cultures in Nor