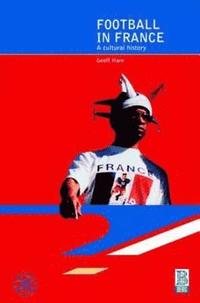 av Geoff Hare
Häftad Engelska, 2003-04-01
361
Köp
Spara som favorit
Skickas inom 10-15 vardagar.
Fri frakt inom Sverige för privatpersoner.
Beställ boken senast måndag 30 november för leverans innan julafton
Finns även som
Visa alla 1 format & utgåvor
France's performance in the 2002 World Cup brought back painful memories of a time when France was a weak contender in world and European football - a time when national or club teams rarely won, and the French were renowned for having little interest in the game. Today, football plays a unique role in French society. French players and coaches are highly sought after abroad and the national team has chalked up significant recent victories, including a World Cup and European Championship. This book is the first in English to examine the extraordinary cultural, economic, and political history behind French football's development throughout the twentieth century and up to the present day. It focuses on the past twenty years and concludes with a discussion of the fallout from the World Cup 2002. Imported from Britain by the middle classes in the late nineteenth century, football entered French national consciousness between the wars. As with everywhere else in Europe, the game helped to unite communities and forge new social identities. Although the State has generously supported youth coaching, the evolution of the professional sport has been slow due to tight community control, high taxes and lack of income from paying spectators. In a bid to compete successfully in Europe, the owners of France's big city clubs are seeking to commercialize the game, despite the resistance of central and local authorities. Hare traces the gradual evolution of traditional French football values and explores the impact of new and controversial business practices. Have French football's influential club chairmen sold out to business values and television? Why has the national team been so successful when club teams have not? How are top clubs being re-branded to catch a national and international audience of consumers? What role does the modern supporter play, and what are the links between businessmen, politics and the commercialization of the sport? What is peculiarly French about Fr
Visa hela texten